Browse: Home / Film On The Disc: Futurama, “Beast With A Billion Backs”

“Will you be moved in with by me?”

Futurama‘s second straight-to-DVD movie, Beast With A Billion Backs, is my personal favourite of the four. It dispenses with the narrative and genre tricks of the first film in favour of upping the scope and scale of a typical Futurama episode; of the four released films, it has the strongest sense of plot, and each of our major players gets a small arc and a chance to shine. Building off the ending of the first film, it begins as a polyamorous rom-com, transforms into a Lovecraftian apocalypse, and ends up an apocalyptic rom-com. With extremely rare exceptions, Futurama was never beloved for Deep Statements; the times it shot for depth were more about capturing a specific emotional depth, like capturing a feeling of absolute despair. BWABB at first seems to be aiming at religion, only to give way to an attempt to explain and quantify love. The end result is fairly trite, to my eyes – I have, in fact, loved people without ruining their chances of happiness, and vice versa – and yet strangely, I think it contributes to the emotional depth of the film and the Comedy Central years of Futurama.

The show’s take on romance was always fairly childish, with the central romances being a straightforward doofus-chasing-a-woman-out-of-his-league, and two totally random side characters thrown together. The final film ends with Leela telling Fry she loves him, and when the show was brought back, the writers were forced to build on that, and as a result Fry and Leela’s relationship was forced to become something much messier, and consequently something more real and affecting. In that context, Bender’s declaration that love is jealous and needy shifts from a blanket statement to a step in the show’s evolution. It’s as if baldly articulating a toxic idea allowed the show to recognise its toxicity (see: the characters are literally being choked as Bender says it) and move on. With a few exceptions, the romances ended up being the most consistent part of the show.

And of course, the strong story structure gave the film a lot of room for jokes, mainly sandwiched between the emotional beats, often subverting them. Pound for pound, this is the funniest of the films, with two of the darkest jokes the show ever did – the most spectacular is Bender literally booting his kid into hell (“No backsies!”), but the funniest is the receipt for the suicide machine falling onto a big pile of receipts. Futurama‘s plotting at its best felt like a consciously half-assed jumping-off point for jokes, something there to provide scaffolding for jokes the way the Muppets’ put-on-a-show premise gave that show structure (contrast with its closest relative, Rick & Morty, which takes plotting as enthusiastically seriously as it takes jokes). This film captures the more ambitious episodes that shot for the heart. 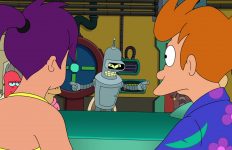 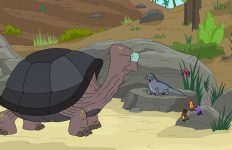