Recently, I encountered a claim that every single former Disney star except I believe it was Hilary Duff ended up on drugs and on the streets and so forth. This is amazingly untrue; I could list. It’s true that child stars have a high percentage of horrible outcomes, but it’s far from a guarantee. Even people who aren’t Disney stars—arguably more so with people who aren’t Disney stars. There are a few prominent examples of Disney stars endangered by the company’s treatment of them. Tommy Kirk. Lindsay Lohan, I think, was more harmed by her father. But one of the things the company must take responsibility for is the handling of Bobby Driscoll.

At first, young Bobby had the kind of background that makes for Hollywood legend. He was born in Iowa. The family moved to Los Angeles for his father’s health. The boy, youngest of five, was discovered in a barbershop of my own hometown of Altadena, in the suburbs. He had a few bit parts and went on to be one of the first two child actors contracted by Walt Disney Studios. In 1946, he was Johnny in Song of the South. In 1950, he was Jim Hawkins in the studio’s first full-length fully live action feature, Treasure Island—the version that gave us “talking like a pirate.” In 1953, he was the voice of Peter Pan, the boy who would never grow up.

He also developed a severe case of acne. One day, the boy who Walt considered a representation of his own childhood drove up to the studio in a car bought with his $1750 a week salary (that’s over $18,000 now) and was turned away. His contract was terminated, and that’s how he found out. He tried working other places, but his work with Disney followed him, as would be the case for most of Disney’s child stars. He tried to return to high school, where he was teased by classmates who had seen him in things like So Dear to My Heart.

He tried going by Robert Driscoll. He tried doing serious drama, but no one would hire him. He moved to New York to try getting on the stage, and that didn’t work, either. He fell in with Andy Warhol’s crowd and became part of the Factory. He became an artist, but unfortunately, he also continued using drugs. By all accounts, Driscoll was a talented artist, but he died alone in an abandoned building in the East Village. The city couldn’t identify him and buried him in an unmarked grave. When his mother tried to find him, she was able to confirm his death, but the paperwork that would tell her where her son had been buried had been destroyed.

The system failed Robert Cletus Driscoll. Walt Disney Studios failed him. Hell, Walt Disney failed him. I think he knew it, too; with the exception of Tommy Kirk, the children who worked in the studio during Walt’s lifetime were not failed in the same way. His relationship with Annette Funicello was weird, but at least no other child suffered the humiliation inflicted on Bobby Driscoll. We’ll never know what an adult Robert Driscoll was capable of, just that he deserved better. Everyone deserves a better ending than he got. 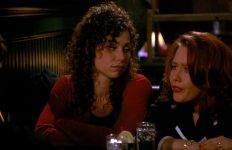 Celebrating the Living: And the Rest of the Cusacks→