He didn’t have as impressive a career as his wife, which is not something we often say around here, especially not when both partners work behind-the-scenes. And in fact, Harry Redmond, Jr., left the industry decades before he died because he was tired, from what I can tell, of penny-pinching from higher-ups. It’s sad, really. He was a talented person with a hell of a career, if not the three impressive careers of his wife, but he’s still someone driven out of the industry by the simple fact that the money isn’t spent the way it ought to be.

His father, too, was in special effects and film production; Harry, Jr., was just following in his father’s footsteps. He began his career in 1926, working in the props department at First National Pictures—one of those companies you have to be a real buff to have even heard of, honestly. From there, he moved on to RKO, where he worked on such classics as King Kong and Top Hat. He left RKO and worked freelance; he was doing a stint for Selznick when he met his wife. He worked on film and TV until the late ’60s.

In addition to his wife, of course, he worked with a lot of other greats. Lang. Hughes. Hawks. Welles. He worked on A Night in Casablanca. During World War II, he did some work for the Army, helping to build the Army Film Training Lab at Fort Monmouth, New Jersey. The idea that someone like that, with that career, could go the entire time without winning any awards—be they from the Academy or his own industry—is a little sad, honestly, but it does happen, even now.

Indeed, it’s long been one of the best reviews of a movie I can give it to say that you can see the budget is visible onscreen. Certainly that’s true of some of the movies Harry Redmond, Jr., worked on, and that it isn’t true of more of them is no fault of his. I wonder how many other people also got frustrated for the same reason and left the business and just haven’t come to my attention yet.

Okay, so the budget of these articles isn’t visible on your computer or phone screen, but I do put enough work into them that I’d appreciate a contribution to my Patreon or Ko-fi. 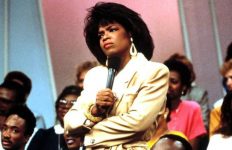