The other day, I happened upon an episode of Finding Your Roots about Glenn Close and John Waters. She turns out to have family from Virginia; he, of course, is from Maryland. Anyone who has seen this show knows what will be in their family histories. I don’t know about anyone else, but I could easily have predicted the exact phrasing with which it was revealed that Glenn Close is descended from slave owners. Yet somehow, famously, Ben Affleck was surprised when he found out there was a slave owner in his family tree. Famously, he tried to cover it up. Famously, it did not work.

Last week, I was watching an episode of Columbo. My son came into the room midway through. Of course, Columbo isn’t technically a mystery; we all find out who did it at the beginning of the episode, usually before Lieutenant Columbo puts in his first appearance. This was, however, well beyond that point. My son, who is seven, watched Columbo play darts with someone then have lunch with him. “Let me guess,” he said. “He’s the killer.” I grant you I’d taught him that the person Columbo spends the most time with is pretty much always the murderer, but still.

Many years ago, I saw an episode of The Jerry Spinger Show. I didn’t like the show, but I used to hang out in the TV lounge of the community college I was attending during the day—I lived alone at the time and didn’t like going back to my empty apartment, and even Jerry Springer was better than that. The first person brought out was a man, and when he was asked how his relationship was going, he said, “Since I’m on The Jerry Springer Show, probably not very well.”

Whether we’ve seen the episode or not, sometimes, we know how it’s going to go. There are genre conventions, yes—I’m not sure anyone was surprised when a show that was playing with TV history did a “the boss is coming to dinner” plot on its first episode—but this is beyond that. This is something that’s so deeply entwined in a specific show that you almost wonder why anyone still watches it. Yes, with Columbo, the point was always to watch how he figured it out, but half the time, he revealed that he’d known who the killer was within five minutes of being brought into the case, and it was just getting the evidence.

While it may seem weird to include a show about genealogy in this mix, it is a deliberate choice, I suspect, to bring out the history of slavery. To have the guests who have never had to deal with its aftermath on a personal, familial level do so. You can tell who’s watched the show—Larry David wasn’t even surprised, and he hadn’t known he’d had family living somewhere they could own slaves until he appeared on the show. But he knew that, if he did, they’d by-Gods be part of his story.

If you are on Murder, She Wrote, and you are an old friend of Jessica Fletcher’s—and probably played by someone moderately famous—you are probably going to be accused of murder. When Kevin Smith was asked to be on Law & Order, he asked if he could be the guy who told them about the guy who led them to the guy who did it. My college roommate and I once heard a “next on The X-Files” that said the episode was about a mysterious force killing people in a small town, and we about laughed ourselves sick listing possible episodes. An episode of Friends features a bit where they describe an episode of Three’s Company as the one where there’s a wacky misunderstanding.

Oh, television isn’t the only medium that does this; see also the Simpsons episode where Homer is reading a Hardy Boys book and Bart complains that they’re all about smugglers. But Columbo ran for over thirty years, off and on—a total of 68 episodes—with the same essential structure to every episode no matter how different the plot was. Not only did people keep watching it, the episodes kept getting made. It may have been a well we had been to many, many times, but we kept going back to it anyway. Probably it proves something about how much humans like the familiar.

Reward me for not just writing the same thing week after week; consider supporting my Patreon or Ko-fi! 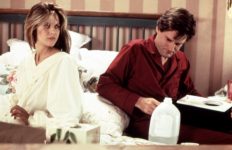 The Unluckiest Role in Show Business→