Browse: Home / Film on the Internet: THE SERVANT

The Servant is a chilling, claustrophobic, and tensely homoerotic film that deserves every bit of championing I can give it. (The original novella’s not bad either, but this is better.) It views its characters with a gimlet eye, an emotional distance that makes the film’s psychological spiral down to hell feel all the more gripping and inexorable.

The film centers on two men. There’s Tony (James Fox), who tellingly doesn’t get a surname: he’s a wealthy, aimless young man. He has big dreams, but it’s hard to believe he could ever bring them to fruition. At the beginning of the movie, newly returned to London, he’s occupying a gutted, ramshackle house that he’s bought to lazily renovate–over the course of the film, it will be filled out and furnished, and nearly none of the choices made in all that will be his. The biggest and most active choice he makes is the one that dooms him–he selects as his manservant the highly competent Hugo Barrett (Dirk Bogarde). When unleashed, Bogarde has a powerful (and strongly physical, masculine, sexual) presence, dominating the frame, and the movie plays that to the hilt. Barrett sizes Tony up quickly as passive, weak, and easily fooled, and he’s right. The power that Tony has is the power he was born with–his money–and that’s all; he can be dominated, and everyone senses it. When his somewhat-fiancée fights with Barrett over control of Tony’s life, asserting herself with throw pillows and flower arrangements, it’s as though the two of them are yanking a toy back and forth between them.

It’s hard to say what Tony wants, except to please and be liked. The strongest wants he has are the ones that other people develop and nurture in him, as Barrett deftly guides him into an affair with Barrett’s “sister,” Vera (Sarah Miles), who–in shades of Parasite–soon enters the house as a maid, and as he steers Tony into heavier and heavier drinking, keeping his glass full and overriding Tony’s protests that he really ought to stop.

It’s a sublimely dark film that resists the easiest kind of allegorical interpretations about what Tony and Barrett represent. Or it has, at least, a power and horror–and an appeal–that go beyond that. That’s something that director Joseph Losey and cinematographer Douglas Slocombe bring out especially well, translating and complicating the social positions with literal positioning, constantly paying attention to the literal placement of Tony and Barrett’s bodies and working with their shadows and reflections.

It’s hard to look away from their toxic dance of manipulation and neediness, and one of the best parts of the film is Bogarde’s ambiguous performance: he’s certainly playing Tony, but he may be playing himself, too, at least a little. It would be interesting to check in on these two in twenty years’ time.

The Servant is streaming on the Criterion Channel. 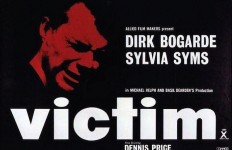