She was the second person I covered for Celebrating the Living, but I have to write about her anyway. Because Olivia de Havilland is more than just a woman. She’s a symbol. She’s a representative of Old Hollywood, and living memory of those days just got shorter. She was the last surviving cast member of Gone With the Wind, and there are actual children in that movie. For many years, I joked that she would live forever because neither she or her sister, Joan Fontaine, would give the other the satisfaction of outliving the other, but Joan died and Olivia kept on going.

A thing that annoys me about her career is that she was often cast as the “plain” woman. This includes her most famous role of Melanie Wilkes. Oh, she wasn’t as striking as Vivien Leigh, I grant you, but she wasn’t unattractive, and her characters were often mousy. Which is weird, because the other half the movies I’ve seen her in, she’s supposed to be really beautiful. And this wasn’t even “oh, we’re putting glasses on her now.” It was just how the characters talked about her.

While, yes, I do always think of her as Melanie, I’d also like to take a minute to talk about The Snake Pit, a movie set in a mental hospital. I’m not sure I’ve seen it all the way through, and what I have seen was years ago, but I was really impressed by the performance. She had Hollywood Crazy Person Syndrome, of course, not any real set of symptoms that would represent a real mental illness, but as I recall there’s a good portrayal of depression in there among the other issues with the movie. And it is intended to be a hope that mental hospitals will be improved and made more into places of healing instead of just warehouses, which yeah.

It’s strange to think that she made fewer than fifty movies. She is such a legend that it’s hard to reconcile that. I mean, part of it is that she was, yes, in one of the most popular movies of all time—even if people don’t like it anymore, it’s hard to deny that it’s sold a lot of tickets over the years. And we’ve just talked about her a lot. She hasn’t acted at all since 1988, hasn’t done a movie since 1979, but she was someone who had done some really popular movies—let’s also mention The Adventures of Robin Hood here—some of the only old movies people still really seek out, I think, outside film circles.

It’s also worth noting that she changed the industry. When she started in the business, actors were under contract to the studio. And once you were under contract, the studio pretty much owned you—they were able to add time to your contract for all sorts of violations, because they could put you on suspension and then insist that the time on suspension didn’t count. She sued. She won. She helped break the power of the studios. Just as we don’t talk about the quality of her acting much anymore, we don’t talk about her strength of character; she was willing to risk not being able to work in Hollywood again. But she won, and the laws are named after her. 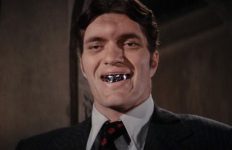