Browse: Home / In Defence Of Birdman

Underdog is a relative term. On paper, Riggan Thomson, protagonist of Birdman or (The Unexpected Virtue of Ignorance), is a rich, overprivileged asshole who has been given advantage above and beyond what most Broadway directors receive and is otherwise guaranteed to make it through the events of the movie with his life intact no matter how badly his play is actually received. But his real goal is to be taken seriously as an artist, and all those advantages become obstacles to that goal. Even without the characters within the movie directly making fun of his stab at legitimacy, it would be hard for me to believe that an ageing, our-of-work actor coasting on his fame as a superhero and wildly out of touch with anything I’d consider reality could grab a random Raymond Carver short story and make something meaningful out of it. The movie successfully sells that Riggan is anxiety-ridden and unsure of why he’s making the play, and it shows how that anxiety is affecting production; this makes it all the more shocking when we see Riggan’s final monologue on opening night and it’s actually quite good. The conclusion I’m forced to come to is that Riggan has, against all the odds, genuinely created great art… and then misunderstood why it was great. Riggan’s performance is rooted partly in the fact that he has chosen to kill himself on-stage at the end of the play; he has completely given up on facing any kind of consequence for how his play turns out, and so he drops any sense of pretense and lets his true anxiety, exhaustion, and shame come to the surface. For that minute, it doesn’t matter that he’s a pretentious twit who has no idea what he’s doing and that he doesn’t really understand the story he’s adapting and that he’s an asshole and a fraud and anxiety-ridden; good art is being made. As much as reason is an integral part of the artistic process, it’s possible to focus too much attention on that process; once good art exists, it doesn’t matter in the slightest where it came from. 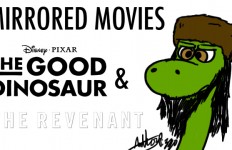 Mirrored Movies #2: THE GOOD DINOSAUR and THE REVENANT→ 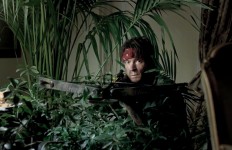 The Advertising Work of Emmanuel Lubezki→