As a child, I adored Dr. Seuss when I was young. I devoured all of his books, but my favorite was his The Lorax.

I grew up incredibly rural poverty doing things like gardening and hunting to survive. Like many who grew up this way, I developed an incredible reverence for nature and appreciated that there was a story that showed environmental issues.

First published in 1971, the book depicts someone called the Once-ler, who lives in a polluted wasteland on a street named “The Street of the Lifted Lorax,” telling the story of the titular character and why it was “lifted.” As I’m sure most everyone reading this knows why: the Once-ler harvested all of the trees in the land and opened a factory, which destroyed its ecosystem and forced all the wildlife to leave. The Lorax who tried to campaign on behalf of the environment and its inhabitants, but was ignored. 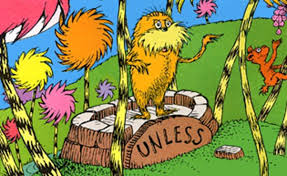 As part of a MA in English program, I took a course devoted to environmental writing and literature. As is customary in such classes, everyone was required to give a presentation on a work of environmental literature. While some students went against the grain by discussing things like the video game Fallout or arguing that Peter Jackson’s film versions of The Lord of the Rings was a work of environmental literature, but most people covered famous works in the genre. All the usual suspects were covered: Silent Spring, The Giving Tree, and of course, The Lorax. 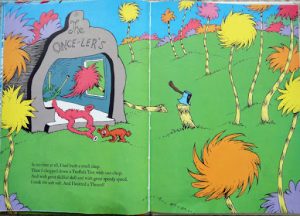 The person who gave the presentation on The Lorax made me see the book in a completely new light.

It can basically be summed up as; the Lorax is a terrible advocate who accomplishes nothing.

I thought about this a lot, and now I see this point everywhere.

For example, I saw that Jon Stewart has a new television series on Apple+ and his fans are excited to see him “own” people like he did on The Daily Show. I can’t help but think that Stewart, like the Lorax, didn’t really accomplish anything through his ownage. He tore into FOX News for years and it’s still a media monolith, America elected Donald Fucking Trump a mere 15 months after Stewart left The Daily Show, and our Democrats have only moved further right.

– The woman who did the presentation on The Lorax was little old lady who looked like a clichéd version of an elementary school teacher (which she probably was), which made it even more entertaining.

-Two people in that class covered The Giving Tree, but one discussed how great the book was, the other argued that it was awful. Neither changed my mind about that book, but it was fun to hear both arguments.

-My presentation was on Industrial Society and its Future by Dr. Theodore Kaczynski, better know as “The Unabomber’s Manifesto” by The Unabomber. I contrasted his life and work with those of Henry David Thoreau, whom I criticized as a hipster douchbag and a giant hypocrite to boot. It was not well-received.