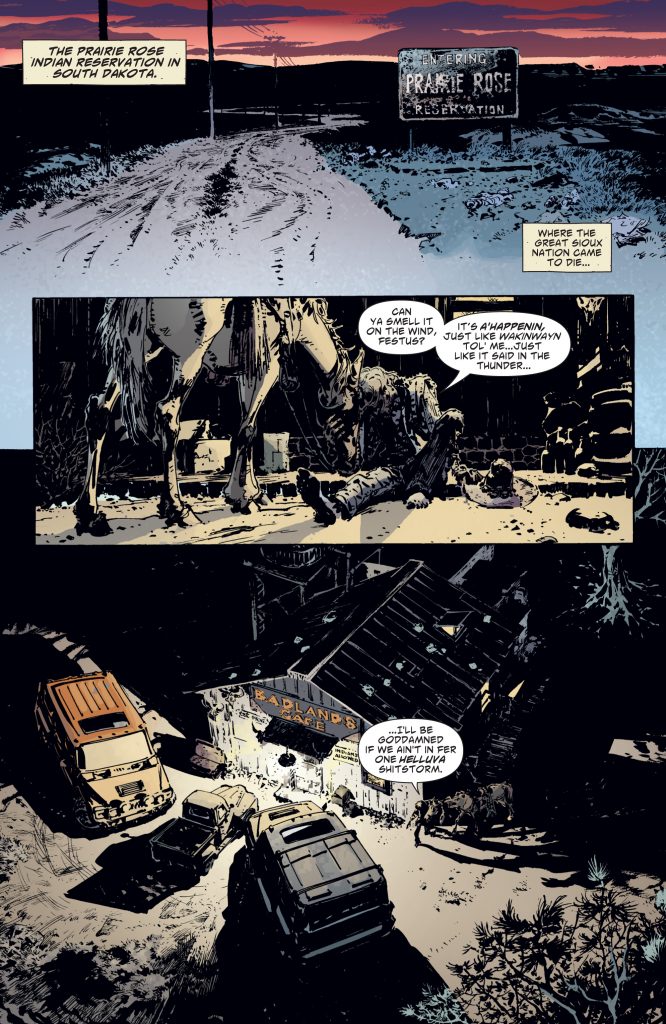 If any comic book got off to a better start than this, I’ve yet to see it. The concise and mythic description of the setting. The simple image that we’ll see from another side at the very end. And that very dialectical, very ominous, very American promise of things to come. Over five years and over a thousand pages, author Jason Aaron and artists including R.M. Guera and Davide Furnó continued to let that shit storm build and build, doling out periodic downpours until it finally explodes in a deluge of biblical proportions.

Prophetic opening aside, Scalped at first seems to be a modest crime thriller. An angry young man named Dash Bad Horse returns to the Prairie Rose Reservation after years away.  He reconnects with his childhood crush, Carol Ellroy (named after Solute-favorite author James), and, after roughing up some goons, goes to work for her father, local kingpin and Tribal Council president Lincoln Red Crow. Meanwhile, he has absolutely no interest in reconnecting with his mother, Gina, even as he hauls some of her traditionalist followers off to jail. On the last page of that first issue, we learn Dash is up to more than just letting country roads take him home. He’s an FBI undercover agent, sent to the “rez” to get the evidence to put Red Crow in prison for life.

Spoilers follow from here on in, so if you want to read Scalped and don’t want to know any more than that, get on it.

So far, so Departed. But as the series continues, it reveals itself to be far more than just Dash’s story. He moves to the sidelines as the two-part storyline “Hoka Hey” gives equal weight to former comrades-in-revolution Lincoln and Gina. The second volume, Casino Boogie, is really a collection of different characters’ stories, all taking place in the fragmented timeframe of the night Red Crow opens his multimillion-dollar stimulus package for the reservation (or at least for himself), the Crazy Horse Casino – and, more importantly, the night Gina Bad Horse is murdered and scalped. We see multiple brawls between Dash and faux-Indian rabble-rouser Diesel (“I’m one-sixteenth Kickapoo, motherfucker!”); Gina’s final hours; Red Crow contemplating his hollow success; a teenager dreaming of a better life away from the Rez; and Catcher, the old man who predicted the coming shitstorm, floating spiritlike through all those stories, maybe a mystic, and maybe just mad.

These one-off stories are one of Aaron’s greatest strengths. Instead of following his overarching narratives straight through, he’ll go off on side streets to develop his characters, their world, and its history. What seemed like a straightforward thriller turns out to be an ensemble piece, or even a Middlemarch-style story of a community as a collective protagonist. The title is a clue — nearly all comic series put their protagonists front and center, but Scalped says all you need to know about the book’s style and mood without tying it down to Dash, or anyone else. Even as he’s gone on to write for high-profile heroes like Thor, X-Men, and The Avengers, Aaron’s made his biggest impact in his shortest stories, laser-focusing on individual team members or the characters on the story’s periphery. Sometimes, he doesn’t even need a whole issue: in one page of Black Panther: Secret Invasion, he gives his disposable, shell-shocked villain more depth than most heroes get over the course of entire series.

In Scalped, even the most seemingly disconnected parts add to the whole. “Listening to the Earth Turn” tells the story of an old couple we’ve never seen before or since; the only appearance by any of the main cast is a billboard in Red Crow’s likeness. But the old couple’s philosophy turns out to have deep resonance with the end of Red Crow’s journey, as he echoes them in his last words before he exits the story: 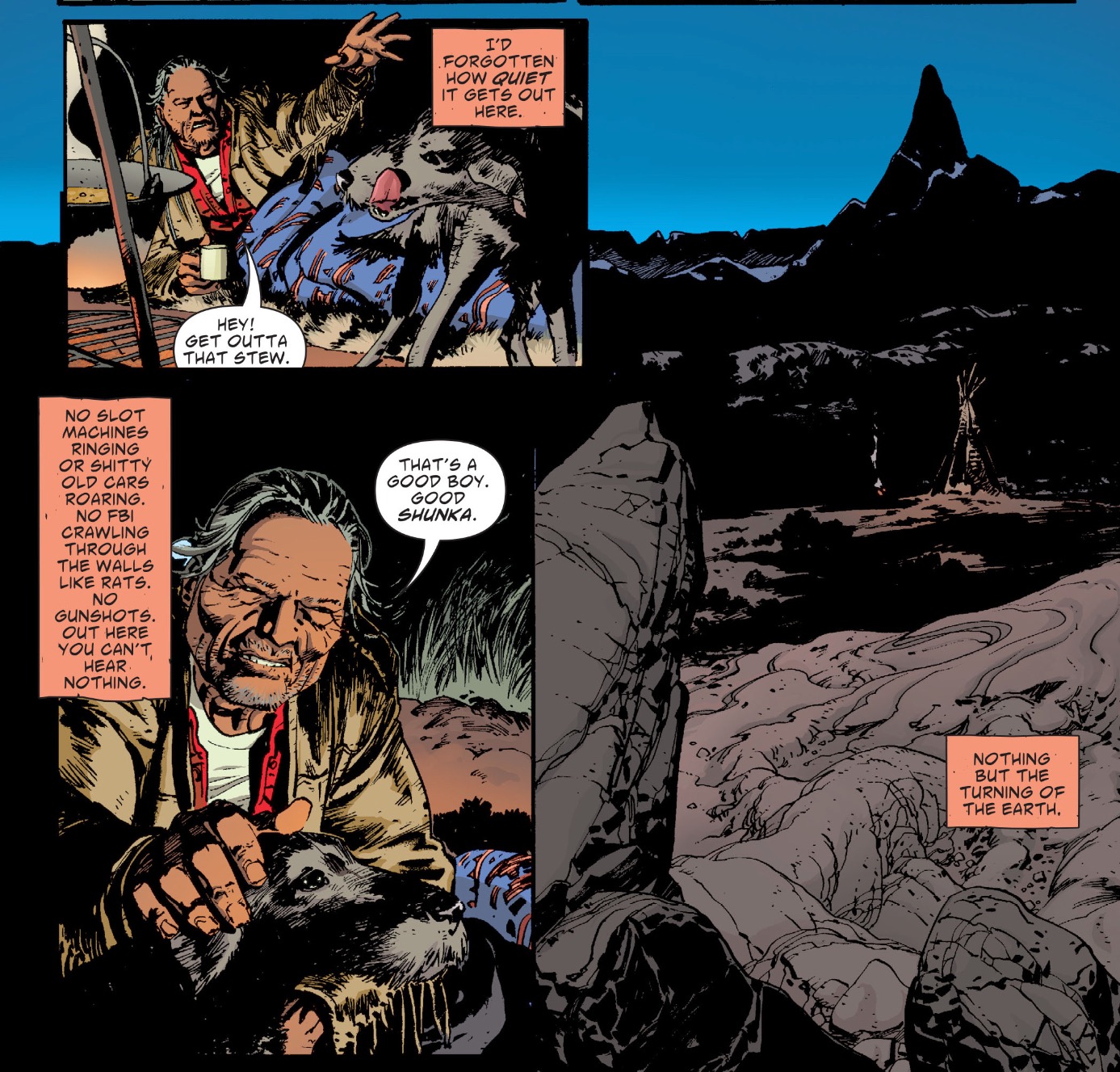 Red Crow, our apparent villain, reveals that deep down, he may be a far better and more principled man than our hotheaded antihero. Even the vilest villains have hidden depths that Aaron never pretends excuse their evil. We wouldn’t expect there’s much more than racist meatheadery behind Diesel’s eyes, especially after we’ve watched him kill a child. But then we see him reflect on his own miserable childhood, where his ersatz Indian heritage was the only thing he could take pride in, before government blood quotas took it away and forced his family off the reservation. This sets us up for a fall the following issue, as Aaron digs into the psyche of Dash’s FBI boss Baylis Earl Nitz. We see his vendetta against Red Crow comes from his deep affection for the men he believes Red Crow murdered and he almost seems too sympathetic to be a monster – until we learn how they earned his affection, and he becomes even more monstrous than he was before.

Before we continue, we’ve got to address the elephant in the room. Here’s an epic story of American Indian life — one of the very few in comics history — illustrated by Europeans and written by a Euro-American. So, is it a commendable work of cultural ambassadorship, or an American Dirt–esque embarrassment? Coming from the same perspective myself, it’s difficult to say, and Scalped is a thorny work no matter what angle you come at it from. On the one hand, Prairie Rose is a stereotypically squalid cesspool of poverty, crime, and alcoholism. On the other, Aaron leaves no doubt about whose fault that is: the legacy of colonization and genocide hangs heavy over the book. Aaron certainly shows his work: Scalped is full of dialogue in untranslated Lakota Sioux, and the characters’ bookshelves are littered with real books on Indian activism and history. In many ways, it’s quietly radical. The FBI isn’t a force for justice, but oppression and petty vendettas. Even America’s great hero, George Washington, has his history of Indian genocide namechecked. On the other hand, most of the cast describe “the Rez” as a sinkhole they only want to escape. But then, a major part of Dash’s arc is learning to embrace and love his home just as his criminal past forces him to leave it. But then again, even Aaron’s own tributes to Indian heritage are full of platitudes and exoticized stereotypes.

There’s other troubling forms of prejudice to grapple with too. Aaron’s tough-guy dialogue makes profanity into poetry, but that profanity also includes a nonstop stream of slurs and other degrading language against every race, sex, and sexuality on the face of the earth. Given the list of these characters’ other crimes, that might seem like a small one to take issue with. But violent words are different from violent actions; watching a fictional character murder and steal won’t make a reader feel like they’ve been murdered or stolen from. Hate speech remains hate speech no matter how you contextualize it: the words are still the same. And there isn’t a whole bushel of context here either. Along with some of the more gratuitous instances of sex, violence, and sexualized violence, it’s little more than adolescent edginess; mercifully, it falls away as Scalped deepens from pulp into myth. The characters’ bigotries may not be Aaron’s, but they still go unexamined and unexplored, with one notable exception.

In “A Fine Action of an Honorable and Catholic Spaniard,” Scalped’s focus once again shifts, this time to Red Crow’s bodyguard Shunka. It’s a riff on classic film noir tropes, as Shunka devotes himself to seeking revenge for the mysterious death of a stranger he was smitten with after a brief encounter. But there’s one crucial difference here: the femme fatale is an homme. As attentive readers might have guessed from his perpetually half-unzipped, skintight leather jumpsuit and the heavily metaphorical padlock he wears on a chain around his neck, Shunka is a deeply closeted gay man. Sent to negotiate with another casino on another reservation that’s been badmouthing the Crazy Horse Casino to booking agents (“Let me get this straight, Red Crow sent you all the way out here to threaten me…over Wayne Newton and Cirque du Soleil?”), Shunka gets tangled in a new set of tribal politics. The tribal council had booted their leader, Joseph Crane, after he came out, and they want Shunka to lean on him before he causes them any more headaches. Instead, they share a passionate night and Joseph turns up dead the next day. The result is a bloodbath.

Scalped and all of Aaron’s work, shows his fascination with the myths of American machismo and the lone-wolf rebel. (We learn the neighboring town’s sheriff is a phony because he thinks John Wayne was in High Noon.) Scalped is a statement not just about American Indian life, but America itself, in love with its language, its myths and its music: story titles are taken from everyone from Hank Williams (“I’ll Never Get Out of This World Alive”) to 2pac (“Ambitionz az a Ridah”). But while these archetypes have been appropriated to consolidate power in the hands of the privileged, Aaron puts the myth back in the hands of the true rebels, the disenfranchised and downtrodden. “Spaniard” offers the perfect distillation of his approach in the cadence of a seventies exploitation-movie poster.

Sam may nor may not have a gun, but if you don’t wanna make him angry, it may be wise to donate to his Patreon. 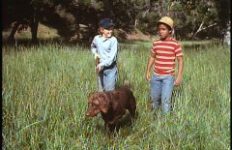 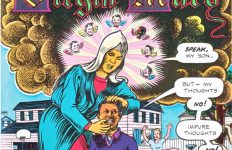 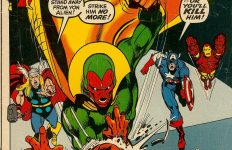 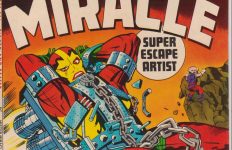