In art, the act of falling in love with someone is connected with the notion of being alive. In the traditional language of cinema, being able to connect with another person is to reaffirm that you’re indeed a living, breathing person. How ironic, then, that Atlantics would be a romantic-drama that would so heavily feature ghosts. Whether they come in the forms of Casper or entities the Ghostbusters would track down, ghosts are always depicted as the very opposite of love, and by proxy, the very opposite of the traditional cinematic depiction of romance. But writer/director Mati Diop works wonders in bringing together life and death for a one-of-a-kind romantic drama.

That romantic drama begins with Ada (Mame Bineta Sane) being conflicted. See, she’s engaged to a rich guy named Omar, but she has no interest for him. Her heart lies with Souleiman (Ibrahima Traore), a guy whose financial situation is far from great. He just got stiffed for his paycheck for a construction worker gig and now he’s headed out to sea with some other local guys to find possible work. After he becomes ocean-bound, Souleiman goes missing and is presumed dead. It’s a situation that leaves Ada forlorn yet determined to get to the bottom of what happened to her lover. That’s a question a local detective is tasked with figuring out, though neither he nor Ada is prepared for what supernatural happenings have occurred as a result of Souleiman perishing at sea.

Atlantics is all at once a romantic mystery ghost drama and somehow, Mati Diop and Olivier Demangel’s screenplay doesn’t get convoluted in merging all these elements together. It helps that all of these seemingly disparate parts are united in a critical theme of Atlantics, specifically, societally-mandated power dynamics. From the opening scene showing Souleiman and his fellow construction workers not getting paid by their unseen wealthy boss onward, Atlantics deals heavily with who has the power and who doesn’t in the Senegal city of Dakar. The poor and women, they don’t have control over their lives while the wealthy and forces like the police, they’ve got far too much control over the lives of the marginalized.

Exploring these power dynamics provides a great throughline for the various pieces that make up the whole of Atlantics and are also a great element for the supernatural aspects of the plot to upend. Ghosts appear in Atlantics not as their own ethereal entities but as spirits that have possessed people. This means Souleiman and company inhabit local teenage women to exact revenge on people like construction site boss that refused to pay them for their work. This means we get scenes dedicating to the default power dynamics of Dakar totally subverted, suddenly teenage women have all the power of a wealthy man who previously used his influence to make the impoverished miserable.

Atlantics isn’t just a tale about the intersection of societal power structures and ghosts, it’s also a love story between Ada and Soulemein. There’s such an intimate sweetness, founded in both the performances of the actors and Mati Diop’s direction, to their initial scenes together that make it easily believable that the pair of characters are deeply in love. Their already engaging romance is enhanced by how it fits into the greater context of the plot of Atlantics. Ada and Soulemein find salvation in each other which eludes them in so much of their lives. Ada’s controlling parents, Soulemein’s lack of financial stability, so much of their existence is out of their own hands.

But in the company of one another, the larger world melts away. With one another, they can be themselves. The grander importance of their romance, so smoothly set up in the earliest scenes of Atlantics, means the loss of Soulemein really leaves an impact on the viewer. This is a quality of the production that’s certainly aided by the all-around remarkable performance of Mame Bineta Sane. She’s remarkable in conveying just how devastating the loss of Soulemein is while maintaining how Ada has to predominately keep her actual emotions all buttoned up inside. We do get dialogue-based peeks inside her perspective thanks to recurring pieces of voice-over frequently set to footage of the ocean that consumed Soulemein.

Bane’s voice-work in these segments is just as adept ass her on-screen performance, there’s such chilling emotional aching in a number of her line readings here. Both Ada’s interior perspective and the aforementioned societal hierarchy are well-reflected in Claire Mathon’s cinematography. The former element is especially well-realized in a visual form when it comes to the use of bright neon lights that dance around Ada and other characters in this little clubhouse right next to the ocean that Soulemein traveled onto. This location, like her romance with Soulemein, is an escape from a suffocating reality where Ada can be herself. Therefore, Mathon uses the colorful lights inside this domain as a subtle reflection of Ada’s own personal emotions. This kind of thoughtful cinematography is the sort of thing you won’t find in any old ghost story and furthers reinforces how Mati Diop’s remarkable movie Atlantics is a truly unique and truly well-crafted motion picture. 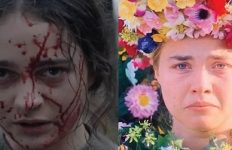