Browse: Home / Disney Byways: “A Knight For a Day”

In an ordinary year, I would be packing for the Renaissance faire. The first three weekends in August. It’s my annual tradition, my annual release from the ordinary world. Not so much this year, for obvious reasons. Strangely, though I’ve been going to this faire almost since its beginnings, some twenty years, three or four sites, and a change or two of management (and name) ago, I’ve never myself made it to the joust. Of course, I’m working while I’m there, and while I’m sure my boss would let me go if I wanted to, I’d rather be in the booth in the guaranteed shade and let the customers go have their fun.

This particular joust, however, features numerous variations on the Goofy design, though not Goofy himself. Technically. Mostly, we see him as young Cedric, squire to the bold Sir Loinsteak. Sir Loinsteak will be fighting Sir Cumference for the fair, white, delicate hand of the lovely Princess Esmeralda. Unfortunately, Sir Loinsteak is knocked unconscious just before the joust. By, um, Cedric. Who first drops the knight’s sword and shatters it then accidentally pushes him all the way over the horse and onto his head on an anvil. So Cedric takes over.

The short was written by Bill Peet, who we’ll get to one Saturday afternoon (next summer good for everyone?) as one of the more interesting figures to work in Disney animation. He spent time as an in-betweener, which nearly drove him to quit animation, before being promoted to the story department. He also wrote scads of children’s books, which I devoured as a child. Somewhere around here, I even think I’ve got his autobiography, which I should get to by next July. The better to write about him, you see.

Using Goofy-like-but-not-Goofy figures in cartoons seems to have been just the way animators would handle having stories that didn’t fit Mickey, Donald, or Goofy himself. Team sports, for example, where no one character was in the lead. In this case, yes, Cedric’s actions are at least slightly Goofy-like, but only slightly and of course there are all kinds of other characters in the short—the other knights, the Princess Esmeralda, the plum pudding vendor, and so forth. Besides, Disney didn’t tend to send its characters into other times and places the way Warners did.

Goofy cartoons often, however, feature a narrator. It’s all those “how to” shorts, of course. This narrator is more interested in what’s actually going, on, however, instead of just yelling at Goofy for screwing up now and again and other than that presenting an idealized version of the events. Either way, this narrator is Cedric’s companion and mentor, from what we can tell more so than Sir Loinsteak was before.

Just because I don’t have faire this year doesn’t mean I don’t have expenses; help meet them by supporting my Patreon or Ko-fi! 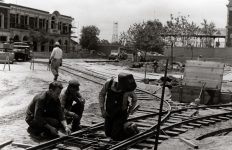