I wonder how much of the outcry from certain people about things in older cartoons comes because they don’t understand the cultural references. Understand, here, that I’m not talking about the racism. I’m talking about the people who read deeper things into what Donald Duck says. As it happens, I watched this cartoon on Disney+, with closed captioning, and anyway I didn’t need it to know that Donald calls the starfish a snake in the grass. On the other hand, it did attach itself to his butt, and that’s not a term that gets used a lot these days, and, well, you might assume he’s saying something else.

Mickey, Minnie, Donald, Goofy, and Pluto are having a pleasant little vacation on what Mickey repeatedly sings is the beach at Waikiki. He sings and plays ukulele. Minnie dances—one really hesitates to call it a hula, honestly, but it’s hula-inspired. Goofy surfs. Donald and Pluto get in trouble with the wildlife.

I’m not sure how familiar most Americans were with Hawaii in 1937. In fact, it wouldn’t surprise me if this were the first exposure a lot of Americans had to surfing. (There’s actually a stance or something in surfing that’s now called “goofy-footed” that’s apparently named for the cartoon.) And I mean, I’m not an expert, but I know that Goofy’s style of running into the water with his board and trying to immediately turn around and catch a wave isn’t the way a lot of people do it. But in 1937, who knew better on the mainland?

The lovely watercolor-style backgrounds of this short were the inspiration for the lovely watercolor-style backgrounds of Lilo & Stitch. Which, obviously, gets a little more involved with Hawaii and its culture than this short; honestly, it could be set anywhere that has a beach, and no one would know the difference. Though the surfing is pretty Hawaiian, in the era at least. I’m not an expert, but I’m pretty sure it’s before surfing was really a thing in California.

The events of the cartoon are pretty neutral funny animal stuff. Donald, who is wearing a grass skirt for reasons, of course sets himself on fire. The ocean is actively opposed to Goofy’s attempts to surf. This is not a popular opinion with fans of either company, but honestly, a lot of these ’30s cartoons would’ve been just as familiar starring characters from Warners—and vice versa. Better Mickey than Bosko, anyway.

Help pay for the therapy I need now that I’ve reminded myself that Bosko was a thing; consider supporting my Patreon or Ko-fi! 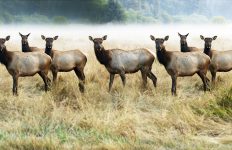