It’s weird, really, how much of ’80s pop culture was inspired by boys’ adventure novels from five decades earlier. Arguably, TaleSpin owes more to that than to The Jungle Book despite explicitly having three characters in common. And, of course, there’s the Cheers aspect; the relationship between two of its main characters was patterned on Sam and Rebecca from that show. The problem, however, is that it takes on board some of the worst aspects of all of them.

The premise is frankly bizarre. Baloo (Ed Gilbert) is an air pilot in a vague possibly tropical but often not city called Cape Suzette. In the pilot, he loses ownership of his own air freight company and becomes a pilot for “Higher for Hire,” run by Rebecca Cunningham (Sally Struthers). She is the single mother of Molly (Janna Michaels); Baloo essentially adopts Kit Cloudkicker (R.J. Williams or Alan Roberts, depending on the episode), your standard Disney urchin who also somehow “cloud surfs” on a metal doohickey towed behind Baloo’s plane, the Sea Duck. Shere Khan (Tony Jay) shows up on a handful of episodes as a corporate raider type; Louis (Jim Cummings) owns a vaguely Rick’s style bar.

And then there’s Don Karnage (also Jim Cummings), who I adore and who I’ll talk about before I get into why I haven’t been able to finish a complete rewatch of the show. Because Don Karnage is really the highlight of the show. He’s the head of a band of air pirates—a concept shamelessly and admittedly borrowed from Porco Rosso, apparently—who terrorize the Cape Suzette area. Kit used to live with them. Don Karnage is definitely from somewhere; honestly, he reminds me of nothing so much as the guy who plays the King of Spain at the Renaissance faire I go to most years. (A moment of silence for not being able to go this year.) Our King has one Spanish parent and one Mexican parent and his accent—not part of his normal speaking voice, I promise—shows signs of both and really a lot of movie accents. It wouldn’t surprise me if it borrows a bit from Don Karnage, really.

But in addition to the vague Definitely From Somewhere flamboyance, Don Karnage is just a fun character. It’s another thing that reminds me of the King of Spain. Don Karnage is extremely self-confident, to the point of delusion. (Don Karnage doesn’t flirt the way the King of Spain does, but hey; Disney afternoon.) His plans always go awry, but he never stops to consider that the common factor in all of his failings is himself. I mean, I can come up with several ways to improve his record with only having watched a dozen or so episodes of the show in the last quarter of a century. But Don Karnage cares not for such things.

Unfortunately, rather than just being about the silliness of Don Karnage, the show puts a lot of focus into the faux-Sam and Rebecca dynamic of Baloo and Rebecca—she’s literally named after the Cheers character. And that’s where we get into the show’s failings, and indeed it’s the same problem we have with Indiana Jones and the Temple of Doom, in my opinion absolutely the weakest of the series. And for one of the same reasons. Namely, sexism.

The episodes aren’t in order on Disney+, but it seems that Rebecca comes into control of what was Baloo’s Air Freight through machinations of Shere Khan’s. She has no experience with running a business. And she’s a scold, a nag, and a general killjoy. She’s never given credit for being right, and she’s always being shamed when she’s wrong. Even though Baloo is quite frankly a menace to everything in the air and has the business sense of a goldfish. Rebecca’s keeping the business running, and who cares?

Honestly, there’s an entire episode about how Baloo loses his pilot’s license and can’t fly, so Rebecca learns how to fly from a book but she isn’t as good as he is. But she learned how to fly from a book and has never flown before and doesn’t kill them all. And Baloo has literally lost his license for what he does. Another episode has her being seen as a nuisance for expecting him to actually follow a schedule. As though that isn’t a really important part of running a flying business and as though taking four hours off in the middle of a delivery to go fishing isn’t a bad thing.

The issue, I suppose, is that Baloo—like Indiana Jones—is a weird sort of male fantasy, and there’s a sort of male fantasy that sees women as an oppressive force without which men could do whatever they want to and get along just fine. Rebecca’s lineage, to my mind, includes Willie from Temple of Doom, inasmuch as Rebecca is also sometimes overmatched and takes it out on the heroic man she’s dragging down. Here, she’s actually in charge, and that makes it even worse. It means that many episodes involve in some way outsmarting her so that Baloo can do what he wants instead of what he’s supposed to.

I really do worry about how shows like this influence my kids’ thinking. I’d much rather they watch a Disney princess than this, because even when the princesses are passive, at least they’re not shamed for being competent the way Rebecca is here. And remember, she’s inexperienced but managing to get good, well-paying contracts, which is more than Baloo was capable of. If they want to reboot this show the way they’ve done Duck Tales, making Rebecca the heroine would be a good way to start improving it, or else making her and Baloo full and equal partners—they have different and interlocking skills, after all.

Show appreciation for my skills by supporting my Patreon or Ko-fi! 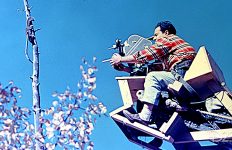 Year of the Month: Adriano Ferreira on TIDAL→