I have seen a lot of educational shorts about menstruation, though I don’t remember seeing one when I myself was a girl at the age where they show these. I know our class got The Talk, and I know we got the booklets, but either I missed the class time where we had the short—I missed school regularly at that age for therapy—or else we didn’t see one, or possibly I simply don’t remember. But I’ve certainly made up for it in the years since, inspired in part by my love of riffed material. And I am here to tell you that the weirdest thing about this one is that it doesn’t teach girls how to use the Kotex products that the sponsors made.

Still, through the beauty of Disney animation, we are learning about the human menstrual cycle. Cycles are all a perfectly normal and natural part of the human experience, after all. You start as a baby, and your pituitary gland nestled at the base of your brain (not shown, though the pituitary gland is) sends out “maturing hormones.” I would like to hope that anyone mature enough to read The Solute already knows the biological specifics we’re going to learn here, but from there, the short does the attempted mythbusting that’s such a prominent feature in this kind of short.

Seriously, you could do worse than to learn all this through the dulcet tones of Gloria Blondell, younger sister of Joan and erstwhile voice of Daisy Duck. Remember when Donald joined Paul Frees to teach us family planning? And as menstrual shorts go, the script’s not bad. Allegedly, it is the first script in Hollywood to use the word “vagina.” Which is . . . a weird part of history. But the medical part of the script is some solid information, and if it’s weird to do it through Disney animation, well, it’s no weirder than every other way they’ve taught girls that.

I will say that it bothers me that these shorts are always aimed exclusively at girls. I’ve actually watched a few of them with my seven-year-old son—in part because of my deep love of riffed material, admittedly, because Bridget and Mary Jo do a ’70s era menstruation short on the disc of theirs I’ve got. I asked Zane about it, and he informed me solemnly that he would have to watch it several more times to memorize the information therein. Which is fair. But I want him to have the information about organs he doesn’t have because it’s important information, and knowing it would in theory prevent some of the stupid ideas that certain men in power seem to have about the uterus and its associated bits and processes.

There is some bad information in this short. It suggests that all periods eventually settle into regularity, and that isn’t true. Some people will always have irregular periods. So far as we can tell, that’s just what is normal for those people, and there’s nothing actually wrong with them. On the other hand, the short does—as literally all these shorts do—try to persuade people that some of what they’ve been taught about what you can and can’t do on your period is wrong. Yes, you can bathe; please do. Yes, you can exercise; it will probably help you feel better.

Crucially, it emphasizes that not a lot of people suffer from extreme symptoms. It kind of glosses over people who do, though it suggests they see a doctor, but the fact is, we as a culture have this belief that women turn into ravening hell-beasts once a month. Studies tend to show that people’s partners—particularly male partners—cannot reliably tell where they are in their cycle. Now, I’m sure some of us have partners so oblivious they wouldn’t notice debilitating cramps and weeping fits, but still. “You may be a little weepy but mostly you’ll probably be fine” is a decent summary for most people.

Oh, there’s a little too much emphasis on appearance and keeping a positive attitude and so forth. My favourite line in the whole thing is “Try not to let yourself be thrown off schedule by being overtired, emotionally upset, or catching cold.” Because sure, okay. But it’s just as easy to blame Kotex as Disney, given that it’s the sort of thing Kotex would be saying at least into the ’80s, when they were teaching me about menstruation. Yes, it’s a little strange that Disney was teaching children about their bodies, but is it any stranger than leaving the process to Kotex?

Keep my family in quality educational materials by supporting my Patreon or Ko-fi! 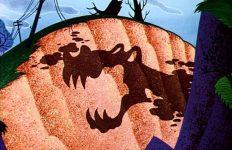 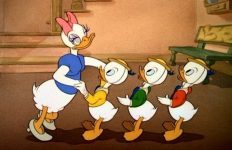