Well-crafted and inventive, this low-budget ($50,000) science fiction thriller makes the absolute most of its premise.  It’s the kind of twisty, unshowy SF filmmaking that I’m always happy to come across in a genre that’s too often dominated by special effects.

Coherence doesn’t even quite hit ninety minutes, but it uses its time well.  First-time director James Ward Byrkit provides a relatively leisurely introduction to our cast, eight friends brought together at a dinner party.  There are ripples of tension.  Em (Emily Baldoni) is vacillating about whether or not she’ll accompany boyfriend Kevin (Maury Sterling) on a prolonged business trip (“If you don’t say yes, it becomes a no,” he tells her quietly–a line that, we learn later, she’s especially vulnerable to).  Mike (Nicholas Brendon) is a not-exactly-working actor who shows just a hint of controlled bristle.  Amir (Alex Manugian) has brought Laurie (Lauren Maher), a “vixeny” type who used to date Kevin, and whose appearance subtly antagonizes the group.  And hippie-adjacent Beth (Elizabeth Gracen) has come bearing a mood-altering substance, for anyone who wants to add a little ketamine to their night.

And then, of course, there’s the comet passing by overhead, causing strange phenomena like power outages, downed cellular networks, shattered phones, and a fracturing of reality.

Byrkit works the mood properly.  The friend group is believable–varied in temperament and outlook, but still people who would know each other and want to spend time together–and Laurie, as the only quasi-outsider, serves to prod their tensions into the spotlight.  She knows what she’s doing, knows that she can leverage her seemingly innocent getting-to-know-you questions into ways to destabilize anyone who’s hostile to her.  It could be a stage play about a dinner going progressively more wrong–and in a way, it still is.

The science fictional plot illuminates the characters and works as a catalyst for them, while providing a kind of sometimes-playful, sometimes-unnerving intellectual fizziness.  The shattered reality around the party keeps leading to new, compounded complications and mysteries.  Characters retrieve a lockbox that contains a ping-pong paddle and numbered photographs of all of them (one taken that night in that house, under circumstances no one can figure out).  Someone outside bangs on the door.  The house up the street, the one that still has power, also has a table set for eight people.  Probabilities are calculated; outcomes are deliberately randomized.  Even the color of glowsticks the characters use to light their way outside turns out to be repeatedly, delightfully relevant.  It’s all tense and, in its reveals and naturally occurring twists, simply fun–even as it turns dark.  The characters are all real enough–and likable enough–that it matters when they start to fray, when accusations are hurled, when Mike starts drinking, when Laurie seizes a moment alone with Kevin, when long-maintained lies are finally exposed.

The low-key, low-budget nature of it all is crucial.  Nicholas Brendon is the closest thing to a name, and the film plays with that smartly by making him an actor best known for a genre show he did in his early twenties (here, Roswell, in a truly perfect pop culture pull); the rest of the cast is mostly free of other associations.  As with the more successful found footage movies, the cast of virtual unknowns enhances the film’s effectiveness, pulling the viewer further into the fantasy.  Coherence is an excellent example of making a low budget actively work in a film’s favor.  There are bits of clumsiness here, but overall, the movie works staggeringly well.  When it comes to a boil, with characters speculating about murdering their doubles, with “home” realities possibly lost forever, and with an infinite series of dark possibilities on the table, it’s flawlessly engaging even when it’s not always flawlessly executed.

Coherence is available for free on Amazon Prime Video. 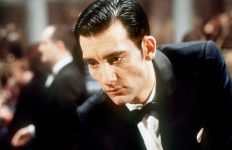 Film on the Internet: CROUPIER→