Each year, the Academy of Motion Picture Arts and Sciences releases a shortlist of foreign language films that are eligible for an Academy Award. For more on how the process works, click here.  In anticipation of that event, we will look at 2013’s nine shortlisted films. Go here  for previous installments. This week is Denmark’s official selection, The Hunt.

The power of a false accusation is the central theme of The Hunt. The film, directed by Thomas Vinterberg, is a tense melodrama about a lie that ruins the life of a decent man.

When The Hunt begins, Lucas (Mads Mikkelsen) is an unemployed teacher working as an aide in a small-town kindergarten. Lucas certainly has his problems–a messy divorce has left him broke and unable to see his teenage son ( Lasse Fogelstrom) as much as he would like–but mostly he has a good life. He enjoys his work, has an attractive girlfriend (Alexandra Rapaport) and he regularly goes hunting and drinking with his buddies.

Lucas’ world is shattered when a young girl (Annika Wedderkopp)  in his care accuses him of inappropriate behavior. The girl’s story is not true. She is upset with Lucas for disciplining her and she makes up a muddled story based on Internet pornography that her teenage brother showed her. When the principal (Susse Wold) hears the story, she panics. Soon the authorities are called in and Lucas is branded as a pedophile who has molested virtually every child in the school. Lucas loses almost everything, including his job and girlfriend. He becomes such a pariah in his small town that he cannot even buy groceries.

Vinterberg does a mostly fine job handling the sensitive subject matter. He makes it clear that the young girl has been victimized as much, or even more, than Lucas. She attempts to tell the truth several times, but everyone either ignores her or encourages her to add more lurid details to her story.

That being said, Vinterberg really over does it with the mass hysteria of the community. Lucas would certainly be ostracized in his small hometown, but I doubt he would be physically driven out of the grocery store by clerks who are pelting his head with canned goods. Also, both Lucas and his son are assaulted on three or four occasions and nobody calls the police. I was waiting for the pitchfork-wielding mob to storm Lucas’ house but Vinterberg did manage to restrain himself there.

The Hunt’s greatest strength is Mikkelsen, who won several European awards for this film, including best actor at the Cannes Film Festival. He is a natural screen actor who understands the importance of underplaying a scene. Mikkelsen has plenty of opportunities to chew the scenery and he  certainly does indulge in a few raging meltdowns, but mostly he conveys Lucas’ deep pain through small gestures and through his face, especially his eyes (Mikkelsen joins his fellow Scandinavian Greta Garbo in being a master of the close-up).

The Hunt was one of the five films on the official Oscar ballot and that’s no surprise since Scandinavian films have always done well with the Academy. The Hunt is one of the better films among those shortlisted, but it doesn’t quite compare to The Great Beauty, which is a masterpiece, or The Missing Picture, which is an important documentary on an overlooked subject.

Grade: B plus. The Hunt has its flaws, but it is still a fine, thought-provoking film, featuring one of the screen’s best actors.

The Hunt is available on Netflix Instant.

Next up is Palestine’s official selection, Omar. 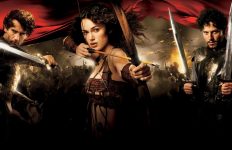 Year of the Month: KING ARTHUR→ 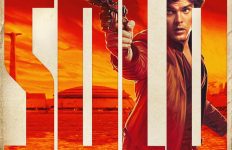 The Academy and Mr. Spielberg→