What if Jimmy Stewart’s Rear Window character were a Brooklyn yuppie?

I confess this isn’t my favorite of the Academy Award nominees for live action short last year, just the most accessible (both in terms of “not behind a paywall” and “less than 30 minutes of French language drama”). If “A Sister” comes available on vimeo, you will all be informed.

At the time I described this as 2019’s shorts entry in the “rehearsal for a mediocre indie drama” category, announcing itself straightaway with a Squarespace-ready title font. Rude. But at least part of what I was responding to was director Marshall Curry’s jump from fine documentary shorts to something so false. All the dolly movement and controlled lighting is too slick, the dialog feels rehearsed, the modern social metaphors too obvious, the visuals maddeningly neat. Maybe I’m sick in the head but I find the perfect framing at the fifteen minute mark quite funny.

But! Time has added to this short in sudden, unexpected ways. What was an open-and-shut case of social media symbolism has been reopened by COVID and a new relationship to finding oneself trapped in a domicile with only your beloved family, mourning an inaccessible world through the glass, glowering suspiciously at your socialite neighbors who seem to be getting along better than you. The pandemic has turned us all into middle-aged Brooklynites, is what I’m saying. And when two members of unacquainted households embrace, the sight sparks an outsized emotion.

So congratulations, “The Neighbor’s Window,” a mere eight months has rolled my eyes back to you. I hope you understand when I say I hope to find you annoying again soon. 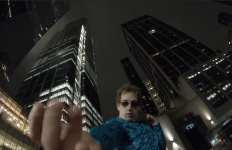