Welcome back! Be sure to catch up on Last Week’s introduction to Neorealism. This week we’re devoting time to renowned director Federico Fellini, one of the institutions for the Neorealistic movement who devoted his later work into redefining the movement to represent his more fantastical and philosophical interpretation of cinematic structure. There is so much to say about these particular movies, but in this case if you haven’t seen these movies at least look up a Wikipedia summary, because I cannot do justice to describing the following films since they are rather dense thematically speaking.

“…My pictures never end. They never have a simple solution…it’s immoral to tell a story that has a conclusion”.

Fellini’s movies have a strong air of existentialism (much more so in 8 1/2 as we’ll see) that does away with the neorealistic movement. We’ve progressed past the recovery from World War II, now we’re living in an ambitious but listless life of glamour and debauchery that considerably leads to a life of wanting more. That certainly is the case of lead character, Marcello Mastroianni, a tabloid journalist who the audience follows through a series of episodes that take us all over Rome and the socialite culture of the late 1950’s. Marcello -easily a stand in for Fellini- is split between his unruly lust for women, power, and intoxicated recklessness and the more cultured and literate life that offers prosperity and peace, ultimately choosing the former after being shown a snapshot of the latter and how it is just as mentally destructive.

The dissection of La Dolce Vita lies completely in its structure and the thematic elements that create this thread-bare narrative together. The movie is stitched together through seven episodes each beginning with a “Dawn” sequence and a “Night” sequence, ranging in tone, shuffling through a wide cast of characters, taking us through various locations, all following Marcello –described by film critic Robert Richardson as “a kind of Dante-esque pilgram”– as he leads us through this lascivious and scandalous version of Rome. There’s debate as to when these episodes take place, either over consecutive days or rather weeks or months even. I looked at it as a reflection of many memories blurring together, culminating in a series of highs and lows, laughs and sorrows, but without a clear definition of when these things happened other than they did and they’re permanent. This is represented best in the episode that follows Marcello’s night out with his absentee father is a rare moment in time where the father and son are connecting, regardless of what their lives are doing outside of their time in the Cha Cha Cha Club. It’s the memories of Marcello recounting how his father had never been around as a child and the despair he has as the evening goes on, knowing that his time with his father will always be short lived whether it’s in a matter of minutes or hours, regardless of the reason. The episode is about the disconnection that the two have, two generations separated by different cultures that know they should be connecting because of their bloodline, but an unwillingness to break that superficial barrier.

It’s the superficial barrier that Marcello aims to fight, at least in some instances in the film when posed with right people. The most obvious example is Marcello’s friendship with Steiner (Alain Cuny), a distinguished intellectual who seems to have an ideal life with a loving wife and children in a posh home where he and his other well-versed friends gather in the evenings to philosophize. But Steiner probably emits the greatest fears that Fellini, and by extension the audience, would have in this post-war era: in the triumph of surviving poverty and dis-assembly, what is there to gain? What do future generations have left to learn if everything is giving to them? Consider how last week’s films focused on characters who were scrapping by with nothing, now look at their children and grandchildren and watch as they flourish in wealth and glamour, ignorant (by choice?) about how hard it had been to get to this point of lavishness. The fear of uncertainty and unfulfilled accomplishment is the undoing of Steiner, a distress that haunts him so much it causes him to murder that of which he knew was safe and comforted. As I mentioned, the ending of the film revolves around Marcello’s career and personal path; while it’s obvious that Steiner’s suicide numbed him from the tabloid life, it also likely paralyzed him from any other personal growth. The safety and comfort Marcello finds is in banal pop and youth culture swallows him and washes over him; there’s always going to be the consumerism of drugs, alcohol, and sex, but the choice to give that up for the maturity and responsibility of settling down and deviating from high culture is unwanted and un-ventured territory.

Lastly we need to address Marcello’s tumultuous relationship with women. Throughout the film Marcello, wants, needs, and has love and affection, but they never seem to gel with the situation and his mentality. He has Emma (Yvonne Furneaux), a woman who’s so sickishly in love with the idea of their relationship that she is willing to overdose when things are going sour. Their relationship is bleak and destructive, where she pushes him away with her obsessive passion leading him into the arms of many other women. The two most important are Maddalena (Anouk Aimee), quite possibly the only woman he truly loves and is perfect for even though she is as self-destructive and bored as he is, and Sylvia (Anita Ekberg) an American/Swedish actress whom he falls in lust with almost immediately. They share what is probably known as the film’s most iconic scene where they stand in the Trevi Fountain, after a night of Marcello’s foolish and purely sexual pursuit for Sylvia. Like Claudia in 8 1/2, Sylvia at first transcends the expectations of everyone, being a vessel of exploding sexuality and hopefulness for some kind of twisted love-lust escapism that Marcello imagines her to be. She is the escape from it all, until reality comes crashing down to prove that she is a childish and spacey woman who is not so liberated when she gets smacked around by her brutish American boyfriend.

The most honest moment shared in the film is between Marcello and a young girl he meets during the “Intermission” of the film. The young girl comes across him again in the film’s final episode, where she joyously waves to him and looks on as he walks away unaware of what she was trying to say over the crashing ocean. Speaking of generational differences, perhaps the final shot on her suggests something more hopeful and less empty for her as opposed to the lush life Marcello and co. has found themselves in. The framing of 8 1/2 revolves around Guido (Mastroainni again) as a grey-haired and sickly director trying to figure out what his next picture is actually about. This vagueness of a plot allows for Fellini to completely embellish in his personal existentialism, as this film was the famous follow up to the cultural hit La Dolce Vita. The pressure of competing with himself over his previous film left the director struggling with self-identification which makes the Guido character an even more obvious in-film substitute. The film meshes illogically flashbacks and dream sequences that all reflect with the current crisis that Guido encounters throughout. Notably these sequences revolve around a series of women and how they at some point or another influenced Guido in his life; his mother, his nanny, his sister, a prostitute he met as a schoolboy, his wife (also Aimee), his current lover, and his “muse” (she of which only appears in the beginning and end of the film).

These women are his harshest critics; vocalizing his insecurities and fears about himself in a cutthroat way whether he’s imagining these conversations or actually having them. The apex of these realities and fantasies clashing together comes in the form of a drawn out day dream where Guido’s wife and all of the women he has known are cohabiting in his childhood home, where they worship and belittle him. He is their king and he is their torturer. But does that make him want to be a better person? Or is he happy with this callousness and misuse of these women he claims to love? There’s a lot of tortured understandings that Guido reveals about himself, particularly by the end when he is left with no choice but to give up the film (and metaphorically kill himself to escape the pressure). I think the film’s use of Claudia, the muse and personification of perfection that is mostly talked about but little seen in the movie, is rather perplexing; she’s such a non-entity throughout most of the film and her presence doesn’t have the magnitude that Anouk Aimee’s character has when she tears her husband down and announces her desire to leave him. Maybe that’s the point, by dressing up and beautifying all the other women who aren’t Guido’s wife, that makes her words and presence more powerful than just her looks.

There’s certainly a quality of mind-mending films such as Eternal Sunshine of the Spotless Mind or even Birdman invoked here, where we are lead down a person’s cognitive breakdown that helps us understand their viewpoint but does not actually justify his actions. The film’s original ending was scrapped in favor of one that didn’t imply that Guido would commit suicide, an ending that I honestly would have believed more but instead we are left with a representation of the tranquility that Guido hopes to achieve (at least that’s how he imagines it). This film was harder to digest, as it’s more of a cinematic epic poem compared to the more Scott Fitzgerald, literature-esque La Dolce Vita.

Final Thoughts: There were qualities of 8 1/2 that rang familiar to me and people I know; that framing device of “this is a movie about someone who doesn’t know what kind of movie to make” would feel rather cheap in the wrong hands and I know those kind of people who think they’re clever enough to get away with something like that. Also many of the conversations Guido and his wife have are…alarmingly…familiar. Fellini’s version of this is extremely personal and a prime example of “osmosis”, merging art and imagination together. This is an elaborate avant garde film, and I’d be the first to admit that I’m not the biggest fan of avant garde nor the best to go into detail about it. That doesn’t weaken the film for me at all, I wish I had more to say about it. I thought about separating the movies this week because there is so much happening in each episode of La Dolce Vita, but it would have been pretty lopsided had I done that. Gloria, in all her Krysten Ritter-like beauty, was my favorite character in either film. A total embodiment of a 60s lunatic beatnik. 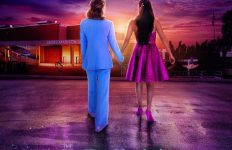