This article originally appeared on a blog of my hometown newspaper. I repost it here because I was inspired to write it by the conversations we have had on this site about the topic, most notably thanks to jroberts548.

Michael Schur is, arguably, the king of the modern network sitcom among a certain set (namely those for whom it isn’t Chuck Lorre). His work as a writer and producer on The Office, the single-camera “mockumentary” based on the British sitcom, informed the shows he would later create, such as Parks and Recreation, Brooklyn Nine-Nine, and The Good Place, the latter which was nominated for a Golden Globe for best musical or comedy series, though it didn’t win at last Sunday night’s awards ceremony.

Watching and thinking about Schur’s shows — and I don’t think this is intentional so much as uncanny — I observed how much the fundamental attitude behind the premises seems to reflect the prevailing liberal mindset of the times.

The Office premiered in the spring of 2005, several months after George W. Bush won re-election. For liberals, it was a difficult time, as they’d imagined Bush to be less popular than he was and saw him as an incompetent bumbler screwing up matters of vital importance. (The inadequate federal response in New Orleans to Hurricane Katrina reinforced that in the national imagination, causing Bush’s popularity to crater.)

Bush found his television parallel in the character Michael Scott (played by Steve Carell), a great salesman (perhaps, even, a guy you’d want to have a beer with) who has been promoted to management and proves ill-suited for the role. Michael’s desire to have his office function as a surrogate family often interferes with his subordinates’ productivity, sometimes in calamitous ways, and his neediness and immaturity are very off-putting in those attempts.

For the workers of Dunder Mifflin, the office motto seems to be: Yes, the boss is a buffoon, but if we just put our heads down and work, we can plow through this.

This attitude is remarkably similar to the attitudes of liberals in 2005: They saw Bush as similarly buffoonish, but his re-election killed any hopes that they’d be rid of him anytime soon. So the attitude became: We’ll get through this and get ’em in the next election. (And they did, taking back Congress in 2006 and the presidency in 2008.)

After The Office, Schur created his first sitcom, Parks and Recreation, alongside co-worker Greg Daniels (also the co-creator of Texas’ beloved King of the Hill). Originally intended as a spinoff of The Office, Parks and Rec maintained the same single-camera “mockumentary” style, moving from small-town Pennsylvania to small-town Indiana. The series focuses on a local parks department in the fictional town of Pawnee, led by the can-do optimist Leslie Knope (Amy Poehler), a bureaucrat of relentless cheer and work ethic.

Parks and Rec premiered in spring 2009, several months after Barack Obama was elected president; as much as anything, Leslie’s optimism and attitude toward her job reflects the “Yes we can!” slogan of the Obama campaign. (Notably, one of her biggest obstacles in her job is her boss, an avowed libertarian who stays in his job with the express purpose of slowing down the workings of the government, something that presaged Mitch McConnell and Congressional Republicans’ stated efforts to defeat Obama’s agenda specifically.)

Beyond that, though Leslie could often be overbearing (and her co-workers’ attitudes toward their jobs often covering the range from “shiftless” to “self-serving” to “incompetent”), on the whole, the governmental department is portrayed as a positive force in Pawnee, much like liberals believed the Obama administration would be.

The next show Schur would co-create (this time alongside Dan Goor) was Brooklyn Nine-Nine, a workplace comedy set in the (fictional) police precinct, with Andy Samberg leading as a brilliant but immature detective, Andre Braugher as the station captain, and a diverse cast intended to better reflect the makeup of the actual neighborhood where the show was set.

Brooklyn Nine-Nine premiered in the fall of 2013, less than a year after Obama’s second term. Though the optimism of Obama’s first campaign had faded — he received almost four million fewer votes in 2012 than 2008 — he was still viewed positively overall by the public and still had steady liberal support.

Less than a year after the premiere of Brooklyn Nine-Nine, 18-year-old Michael Brown was gunned down in Ferguson, Missouri, by Darren Wilson, creating a flashpoint for the Black Lives Matter movement and kickstarting a long-overdue national conversation about policing in America. The attitude of the show seemed to be in line with liberal ideas about policing and even governance in general — these institutions can function well if staffed by a well-meaning, diverse group of people who better represent the people they, well, represent. (This contrasts with the conservative idea that policing in America is fine as it is and with more left-wing ideas like completely reconceiving the function of policing or even abolishing the police.)

Schur’s latest sitcom, The Good Place, moves away from familiar workplace settings for something more high concept. The Good Place is set in the afterlife, starring Kristen Bell as Eleanor Shellstrop, a recently deceased woman who finds herself in the titular heaven due to an apparent clerical error, and Ted Danson as Michael, the supernatural “architect” who created the neighborhood paradise and often serves as Eleanor’s guide to it.

The Good Place premiered on September 19, 2016, less than two months before the election. And the prevailing liberal mindset of the time — aided by polling and election predictions of outlets like the New York Times — was that Hillary Clinton would easily win, that Donald Trump’s boorishness, life of personal scandal, and lack of understanding of what the job entailed would ultimately sink him.

If we’d watched The Good Place more closely, we might have seen the real result coming. (Spoilers ahead.) Of the four humans in the main cast who had died, two were American and two international. The latter are Chidi (William Jackson Harper), a professor of ethics in Australia by way of Senegal, and Tahani (Jameela Jamil), a wealthy Pakistani-British socialite. The intelligent, cultured and refined Chidi and Tahani stand in stark contrast to the two Americans: Eleanor, a person who had built up intense selfishness as a defense mechanism, and Jason (Manny Jacinto), a good-natured idiot prone to crime and destructiveness simply by not knowing any better, roughly the walking embodiment of the Florida Man meme. (They’re both party animals as well.)

Maybe Schur’s conception of Americans was revealed, inadvertently or not, in those character creations: Such selfish, crude and destructive people would, to the liberal imagination, be exactly the kind of people to vote for Donald Trump (well, aside from the near-certainty that neither Eleanor nor Jason would have voted at all).

The major twist of the show’s first season comes in the finale. Eleanor and her companions have been under more-or-less constant stress since arriving in the Good Place; this eventually clicks with Eleanor and makes her realize they are actually in the Bad Place.

And this twist mirrors the realization and sinking feeling many liberals had when the votes were counted and they saw that Donald Trump had won, and by even bigger margins in the swing states than they expected: We are actually in hell. 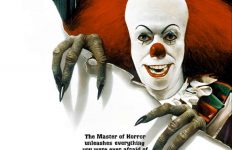 You’ll Float Down Here – Bhammer100 on STEPHEN KING’S IT→