I actually stopped watching Matt Smith’s run on Doctor Who after one season – I enjoyed his performance, but I found that Stephen Moffat’s approach to being a showrunner counter to what I enjoyed about RTD’s approach. But one day I was channel-flipping and I caught the scene of his character regenerating into Peter Capaldi’s form, and even out of context, it moved me to the point of tears. It popped into my head again recently and it occurred to me why I found it so moving. The Doctor is one of the most spectacular cases of a single work creating a role from scratch and committing to it wholeheartedly – the only specific thing that comes even close is the Captain’s chair on Star Trek, and that lacks the brazen originality of our favourite Time Lord. The mythology of the Doctor is so specific; not just that they fly around in a police box and use a sonic screwdriver, but that they protect Earth, take on at least one Companion they can exposit to, act as a tourist in space and time, actively destroy authority, and do a whole lot of running. Each detail is very specific and memorable and the constellation they make even moreso, and even better is that each detail also has a specific purpose; the police box is a cheap way of getting our hero around, the sonic screwdriver lets us bypass some basic social expectations, the Companion provides both a dumping ground for exposition and a human sense of wonder to the strange sights, and the running, if properly executed, allows characters to quickly move from one scene to another. But the most important part of the mythology is the Regeneration.

When William Hartnell, the original actor of The Doctor, was facing failing health, regeneration was created as a way to recast him and allow the show to continue. This ended up being effective long beyond what anyone could have dreamed. It’s crossed beyond a practical concern and into a genuine expected pleasure; it’s often remarked that Who fans are unpleasable assholes who will complain about every and any change brought into the show, but the flipside of that is that every fan is also expected to have Their Doctor – the version of The Doctor that was speaking to them, personally, and who embodied what they want out of the show. The details repeat, over and over, but they’re expressed a little differently every single time and have a slightly different meaning behind them. It means the show is not an expression of a single consciousness but a world that many people pass through; not just individual actors playing The Doctor, but individual showrunners, writers, directors, set designers, prop masters, lighting crew. Every one of them find their own spin on these details. These people enter the Doctor’s world knowing their time has an expiration date. This is a world in which everyone knows they will die and be replaced.

Which brings me back to the regeneration scene of the Eleventh Doctor. He knows he’s about to die and be replaced by someone else, and he’s at peace with that. One big aspect of the mythology is that Matt Smith’s Doctor actually is the same person William Hartnell played in 1963 – that he’ll retain all his memories and all continuity of self – and that it’s more a death of how those memories and that self will be expressed. He’s sad that his personhood will no longer be put out into the world, but he knows the next Doctor will remember him, and that brings him great comfort. As long as someone keeps calling themselves The Doctor, Eleven will be part of that lineage. I think this moved me because it squares the circle of the individual versus the collective, at least in terms of archetypal power. Those two concepts are often played in opposition to each other; a collectivist bemoans the loss of community spirit and refusal to sacrifice the needs of the one for the needs of the many, whilst an individualist fears being crushed under the weight of a thousand other people and says that if everyone’s special, then nobody is. It seems you have to either destroy yourself or everyone around you.

But maybe both can lift each other up. Ironically, the more Doctors there are, the more unique and individual Smith’s take on the character seems. His mannerisms, his mode of dress, his voice, his face. Decisions he makes that other people choose not to replicate or maybe couldn’t. By being The Doctor, he has revealed who Matt Smith is. I see resonance with situations where continuity of self is not maintained. Lenny Bruce and Billy Connolly and Norm MacDonald and Tom Meyers and Hannah Gadsby and Ruck Cohlchez and I have all each taken the name Stand Up Comedian and stood up on a stage, holding a microphone, talking to an audience. Our audiences had certain expectations about what we were supposed to do and what effect we were supposed to have. We made decisions about what to talk about and how to talk about it and what to wear and how to move or stand. Somewhere on another plane of existence is the concept of the Stand Up Comedian, and we each got to tap into it and corrupt it with our own individual goals and histories and whatever ineffable sense of being is central to ourselves. Even when we stop – and some of us have stopped – we still got to add to that big pile of history. I get to remember when I got to be a stand up comedian, and the Stand Up Comedian gets to remember when it got to be me. 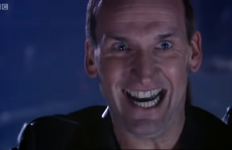 Year of the Month in Comics: September 1985→