I am thrilled by this in a way; as I’ve said before, he had a speech delay and didn’t speak at all until after he turned eighteen months. That he can now identify something like a half-dozen TV shows using his words is a kind of joy. Those are words, after all, a mere eight months after he wasn’t speaking at all. And if they’re words connected with TV shows, I’m willing to deal with that. He can also say “Pigeon,” a reference to one of his favourite books. In fact, he can name several specific books when he wants me to read them.

The American Academy of Pediatrics recommends limiting screen time for kids to an hour or two a day and says that children under two should have none at all. It is currently believed that too much screen time can limit development of empathy. And, of course, every parent fears the kid who zones out completely all day, staring at a screen and not going outside to play.

What I wonder, though, is how much of that depends on how you interact with the kid while they’re using the screen. I never see that covered. It isn’t just that my son is usually sitting on my lap while we watch whatever-it-is. It’s that I talk to him as we watch things. It’s that he’s never just watching TV. He’s interacting with me at the same time. I don’t know if that’s different, because no one will tell me.

Now, I do think Simon has gotten some benefit from TV, and not just because he now expresses joy at episodes of Mystery Science Theater 3000. (It’s probably the puppets.) He’s only two, and he knows all his letters, albeit not in order, and can more or less count to nine. (He tends to start over after three, but if you push things, he gets all the way to nine, yes.) He knows “circle,” which I certainly didn’t teach him. Likewise, he knows rectangles and squares. He can’t say those words, but he can point to them when you ask him to.

So I’m worried. I’m not sure how you could do studies on this. It’s impossible to do double-blind; I guess you could give a bunch of kids tests where the people interviewing them didn’t know how much screen time they got? I don’t know. And of course, it’s hard to test anything on two-year-olds, because their maturity level varies so wildly. Who can say if a kid’s behaviour at that age is based on watching four hours a day of Sesame Street or because that’s just what the kid is like?

Honestly, though, my kid won’t let me use TV as a babysitter. He doesn’t hold still. If I sit him in front of Daniel Tiger and go into the other room, he follows me. He’s much more interested in figuring out what I’m doing that watching what the characters are doing. 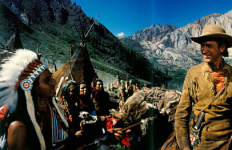