It feels like every couple of years some yahoo comes out with a hot take labelled something like “The Star Wars Prequels Are Actually Good”, and I admit I get a tremendous amount of satisfaction from the fact that every single time, the collective nerd culture eviscerates this notion like a cartoon school of piranha on a dead cow. Look, I’m an open-minded guy who lets people like what they like; I’m quite proud of the fact that a friend of mine told me that my Batman And Robin article articulated why she loved that film. But there’s something comforting in knowing that even as styles of both film and criticism go in and out of fashion, humanity as a whole understands that the prequels were a mistake. In my experience, the people who do like the prequels like them the way I like Dragon Ball Z – enjoying ideas, aesthetics, and the overall feel of the story while admitting the actual process of watching it is a chore. I even kind of get why impulsive contrarians try to fight the tide; in general, being an iconoclast is fun, so could you imagine being the guy who tore down one of the fundamental pillars of 21st Century Geekdom? I can see the picture in their head, like a scene in a Quentin Tarantino or Kevin Smith film (“He’s convinced me! Give me my dollar back!”). The problem is, these are genuinely badly made movies from just about any perspective you choose to stand.

As of this writing, the gold standard of Star Wars Prequel criticism is RedLetterMedia’s Plinkett reviews. The Plinkett reviews have been criticised for nitpicking individual details and railing against the movies for not fitting to a Hollywood template,  but I think they went by that completely honestly, and so that’s what their positive value is. These reviews were written by people who said “We have very negative responses to these films, so let’s go through detail-by-detail and see what looks right and what looks wrong”, and they could break down things like illogical character decisions, nonsensical worldbuilding, and most of all the ways in which this movie does not resemble an entertaining film. I think it’s that last point that trips a lot of people up, actually; certainly, I’ve railed in the past against people who argue more with the idea of a movie than what’s in front of them. But it’s completely appropriate in this case because these movies really don’t resemble an entertaining film. It’s nitpicking to ask how Jawas make a living on Tattooine; it’s not nitpicking to ask who the goddamned protagonist of The Phantom Menace is. You could say the Plinkett reviews are the perspective of your average movie viewer, only moreso – someone who wants to see a movie that works how movies are supposed to work, and can articulate precisely why they don’t using words like ‘protagonist’ and ‘arc’. I think Plinkett critics are more looking for some kind of grand unified theory.

Which is why I decided to give the prequels a shot. I last watched them in 2012, and everything I’ve learned about storytelling in the seven years since then has left me with one conclusion: if you gave me a lifetime, I’d never be able to tell you why George Lucas made the Star Wars prequels. The original trilogy was a loving mashup of every single movie and serial that Lucas had ever seen, throwing together everything from Flash Gordon to kung-fu films to WWII aviation films, held together by fundamental storytelling. Even outside the arcs of Luke forging his identity as a Jedi and the romance between Han and Leia, the movies are brimming with life and purpose, gleefully merging archetypes and scenes into a potpourri of imagery. The prequels, on the other hand, feel like they were mainly constructed with an eye towards what would be easy to build and work in. It blew my mind when I started watching Always Sunny years later and realised the level of filmmaking in that show was not much different from the prequels – constant medium shots, whether they were discussing trade negotiations, the existence of a clone army, or Anakin having murdered children.

To put it another way, this is a movie series with no sense of home. There’s no sense that Lucas did any prep work before going into the story – not “this is how the world works” or “these are the actions I want to see on screen” or even “this is the emotion I’m hoping to evoke”. Worse, the series doesn’t seem to learn anything; the action flies in and out of the frame, disconnected from what happened before and failing to have an impact on what happens next. We’re just seeing a carousel of images held together by the vague justification of fate and Teh Force pushing events forward. Revenge Of The Sith is thought of as the One Vaguely Less Shitty Prequel, and that’s entirely because it has the sole purpose of getting us from the situation at the start of A New Hope, which gives it something resembling an arc, a plot, and a purpose. It’s the only one where most of the action feels like it could only have happened in that order. Even then, there’s a sense that Lucas is sullenly going through the motions; the famously epic lightsaber fight between Anakin and Obi-Wan feels like he just threw up his hands and used every cinematic trick to underline it in a desperate attempt to get some kind of energy from it (I may be projecting, because by the time I’d gotten to the third film I’d deeply regretted picking this as my essay subject this week and was sullenly going through the motions of watching it). Padme just up and fuckin’ dies, Threepio gets his mind wiped, and Luke goes to Tattooine, go watch the original trilogy again.

Honestly, I thought I’d find something of value watching this. Almost always, consensus flattens and simplifies. There is a core of an interesting story (mainly confined to the last film) about how Anakin is an emotionally unstable young man who neither understands nor identifies with the strict discipline of the Jedi, and ends up drawn to Palpatine because the Chancellor gives him ways of expressing his emotions rather than repressing them like the Jedi force him to. There’s room for expansion of what it means to be Jedi and Sith with a long-term extrapolation of how unique Luke’s journey is and the ways he deviates from his father. And there are genuinely cool ideas wedged in the crap, like the clone army or Darth Maul, but they’re all more successfully explored in the Expanded Universe. So even the idea of stripping this trilogy for parts feels off the table. It’s a shambling, undead piece of media, unable to produce anything the way the original trilogy created a whole generation of filmmakers but, due to its name, unable to truly die. All it has going for it is the memes. 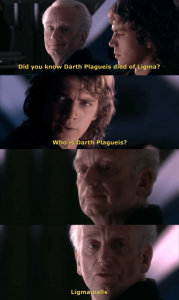 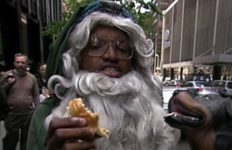