Browse: Home / The X-Men Movies Comes To A Close With The Grim Snooze Dark Phoenix

“Make way for the X-Men, an outdated metaphor for racism from the 1960s!” – Deadpool (Ryan Reynolds) in Deadpool 2

The X-Men movies have had an erratic track record in their nineteen years of existence but their highest points showed an admirable level of ambition that fit these audacious comic-book characters. Creatively gusto spin-off’s like Logan or Deadpool took the American superhero movie into unique terrain while X-Men: First Class used a period era setting and a zippy tone to breathe vibrant life into a tired franchise. In that context, the already disspiriting low-quality of Dark Phoenix becomes extra sad to see, it’s such an all-around lackluster production that’s as groggy and lifeless as a hungover college student. All of the ambition that marked the best entries in this series is gone, replaced with all the enthusiasm of a new kid forced to publically introduced themselves to all the students in the class.

Just like 2006s X-Men: The Last Stand, Dark Phoenix adapts the iconic 1980 Dark Phoenix Saga comic book saga written by X-Men comics legend Chris Claremont. As told here, this storyline sees X-Men member Jean Grey (Sophie Turner) getting hit by a massive wave of cosmic rays while on a space rescue mission. Such an experience should have killed her, but she emerges without a scratch. However, it quickly becomes apparent that Jean Grey is far from OK as she begins to act in aggressive and strange ways that see her becoming a danger to both mutants and typical human beings alike. The main mutants of these X-Men movies, including Professor Xavier (James McAvoy), Jean Grey love interest Cyclops (Tye Sheridan) and recurring mutant baddie Magneto (Michael Fassbender), are divided on how to treat Jean, with some wanting to kill her and others wanting to protect her.

Having only read the first few issues of the original Dark Phoenix comic book storyline (the ones introducing Dazzler and Kitty Pryde), I can’t tell you how Dark Phoenix functions as an adaptation, but as its own film, Dark Phoenix is such a slog to watch. Writer/director Simon Kinberg, making his directorial debut on this project, has decided to approach this story with a level of grimness that feels like it came straight out of the post-Batman Begins era of superhero cinema. There’s nary a moment of levity to be found here while action sequences are kept to a minimum. As many scenes are set in the black of night as possible while indoor environments like Magneto’s shack have as little interior lighting as possible.

Unfortunately for Dark Phoenix, embracing darkness in the lighting to such a profound degree doesn’t automatically make your movie a thoughtful grim exercise. All it does is individual shots hard to see and renders the sets look indistinguishable from each other. The likes of Elaine May, Lynne Ramsay or Ingmar Bergman managed to make extremely bleak movies through actually interesting storytelling or thoughtfully exploring grim themes, not just through turning off all the light switches in sight. Why, even fellow X-Men movie Logan managed to make a darkly toned feature that cleverly heavily utilized sunlight as a solid contrast to the despair felt by the characters. Dark Phoenix does not have that kind of thoughtful cinematography or directing, not by a long shot.

The murky looking cinematography is accompanied by some awful fight choreography. Surprisingly for a summer blockbuster, there’s little in the way of spectacle-driven action scenes but the rare times’ mutants do brawl with one another, it all just looks pathetic. Individual powers of the assorted mutant characters aren’t put to fun use while the direction and editing in these sequences is sorely lacking in energy or fun. I also have to wonder why Nightcrawler (played by Kodi Smit-McPhee) is the only mutant that always looks non-human? The mutants of Dark Phoenix are so visually boring looking, they’re all just humans who could appear in any movie! Even the alien enemies (one of which is played by Jessica Chastain) are portrayed as humans, we never see their CGI alien forms completely. Where’s the imaginative character designs that could at least give us some cool-looking extra-terrestrials or mutants to help counteract the sloppy directing and limp writing?

Speaking of writing, Kinberg’s script is a tepid affair that, like the directing and cinematography, embraces a shallow version of grimness to tell a cosmic version of The Exorcist but is pretty much running of empty in the way of personality or depth. This is especially true when it comes to the characters of Dark Phoenix who are barely defined as people, which makes it hard to get invested in how they react to Jean Grey’s newfound powerset. This is especially true when it comes to Jean Grey herself, an individual at the heart of this whole affair yet never someone who actually becomes a fully-realized person. How she reacts to her newly enhanced powers keeps hinting at some interesting ways to explore her as a person, chief among them being that how she’s impacted psychologically is depicted like someone with an actual mental health issue. Alas, they never explore those ideas fully. Her perspective remains on the outskirts of this story while her own personality as a person is never even established.

Another way Kinberg’s screenplay fumbles the ball in executing a potentially interesting character-centric part of the production is in regards to Charles Xavier and whether or not he’s actually a hero. It’s a concept brought up repeatedly in the first half of the story before the movie walks back on it entirely in favor of reassuring everyone that Xavier is exactly as awesome as everybody thought he was. The vast majority of the writing here wastes any chances for actually interesting explorations of these mutant characters and their world in favor of a forgettable bore of screenplay that closes out with a derivative climax that manages to rip-off Avengers: Infinity War, Train to Busan and Captain Marvel in one fell swoop. All the actors on-screen, including the likes of Jessica Chastain and Michael Fassbender, just seem bored out of their skulls in their performances too, which only compounds the tedious nature of the production. The best X-Men movies have been marked by a sense of ambition but Dark Phoenix is just marked by a sense of weary exhaustion.

Scoob! Has Easter Eggs A-Plenty But Little Else to Offer→

MOOD INDIGO: Half Mess, Half Masterpiece→ 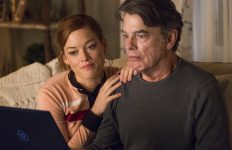 ZOEY’S EXTRAORDINARY PLAYLIST is the astonishing, unexpected TV gem of 2020→