How much are we willing to forgive and forget in older movies, ones where they have an attitude or practice that now would almost never be considered as kosher?  Should we condemn it out of hand, accept it as of that time or take the middle ground? All of this comes to mind for me in Shanghai Express, a movie that almost demands you wrestle with certain (to use the current parlance) “problematic elements.”

Frankly, there are problematic elements.  There’s yellowface. There’s Hollywood Orientalism.  There’s sex work shaming. But all of these are part and parcel of the plot and feel of the movie and I want to wrestle those a bit rather than just condemn a 86-year-old production.

First off, a bare sketch of the plot.  A group of people, mostly European, are taking an express train from Peiping (modern Beijing) to Shanghai.  There’s British Captain Donald “Doc” Harvey (Clive Brook), a missionary named Mr. Carmichael (Lawrence Grant), a cynical gambler named Sam Salt (Eugene Pallette, he of the gravel voice you know as the fat friars in The Adventures of Robin Hood and The Mark Of Zorro), and most importantly two courtesans: Shanghai Lily (Marlene Dietrich) and Hui Fei (Anna May Wong).  Everyone is traveling to Shanghai for their own reasons, and it’s just a coincidence that Lily and Doc, two old lovers until he left her five years before, are on the same train.  There is also Henry Chang (Warner Oland), a mysterious Eurasian man who no one seems to know what to make of. Halfway through the trip, the train is stopped and boarded by soldiers from the Chinese government, looking for rebels, and find a man whom they drag away.  That night, the train is stopped again by the rebels and we learn that Chang is actually the head of the rebels and will use anyone he can find in the passengers to trade for his compatriot. (In this case, Doc, who is on his way to Shanghai to perform an emergency surgery on the governor.)

So.  Here is where we get into the yellowface.  Warner Oland, as you might have have guessed from the name, is not of Asian ancestry.  In fact, he was Swedish-American. Why he ended up playing a ton of Asian characters in Hollywood (including a lot of outings as Charlie Chan) is a subject for a much longer essay, but it’s so glaring in 2018 (my wife actually glanced at the movie and wondered why he looked Latino).  Yellowface is such an obviously terrible thing that went on for quite a while and yet…Oland is good in the part. I can’t quite condemn him for his performance and taking a job; it’s just what 1932 is. After a while, I just decided I had to accept it for what it was.

Then there is the treatment of sex workers in this, which ends up actually being more complicated than one might think.  You can feel the Hays Code starting to creep in as Lily and Fei keep being condemned by fellow travelers, but what’s great is that the movie never makes it seem like those commendations are especially a good thing.  The Reverend, who can come across in the beginning of the movie as a prudish ass who doesn’t want to even be near these supposedly slatternly women, comes around on them and has a lovely scene with Lily toward the end where he talks about faith and trust, but without judgment.  I never get the feel that the movie is actually approving of their profession…but it’s not making an easy condemnation of it either. 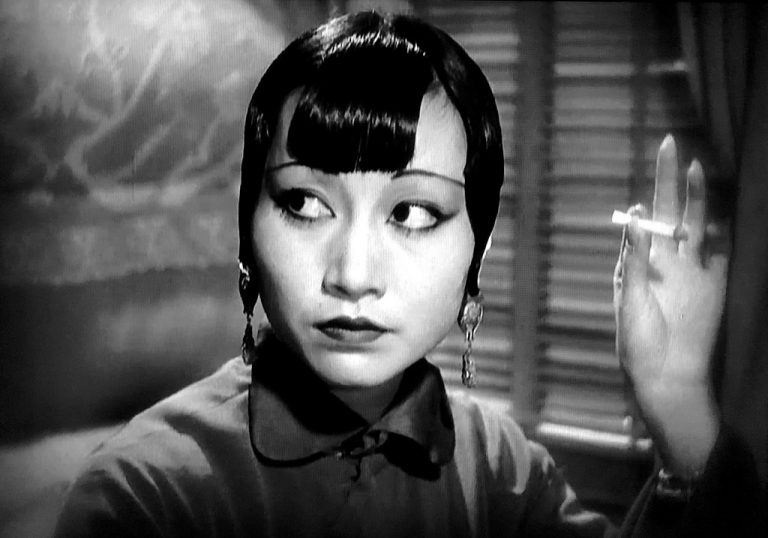 But then we get to my one really big problem of the movie.  Anna May Wong, who always deserved to have a much bigger career than she did, has to play a character so inscrutable here that it’s actively annoying.  She should have so much to do here but instead is always lurking in the background until she takes revenge on Chang (and even that is only half explained, outside of her approving of the bounty on his head as leader of the rebels).   Wong is so damn good in what she has to work with that you just want more of her rather than yet another very well-lit shot of Dietrich. Anyone wants to remake this, they would do well to just make it about Hui Fei and her story.

Instead, what the movie boils down it is the love story between Lily and Doc and sadly, that’s kind of the least interesting part of the movie even though a lot of the plot hinges on what they’re willing to do to save each other as hostages.  But I’m just never really sold that much on their relationship; Dietrich is wonderful in expressing her regrets of how they left each other five years before, but Brook is…not that good at it. (The movie knows it, too; Dietrich gets regret shots that only show part of her face and she kills in them; Brook shows his whole face and can’t approach it.  There’s more good relationship work in twenty seconds between Dietrich and Wong than an entire movie’s worth of Dietrich and Brook.)

Overall, it’s not the best movie of 1932 (though it was the box office winner for the year, it ended up losing Best Picture to a far superior ensemble piece, Grand Hotel).  But I’ll always recommend it if you want to see a pretty good ensemble piece of work.  It’s not quite a classic, but it’s definitely worth your time.