I suppose it’s little surprise to people that, as I write, I tend to keep IMDb up to refer back to about this and that. Since today’s article was inspired by the hundredth birthday of author Beverly Cleary, I expressed grumbling irritation that she wasn’t on the front page and three people I didn’t recognize were. (Turns out that one really is that obscure, one’s a writer, and I just don’t watch the right TV to recognize the third.) Then, I noticed that, well, they don’t have a picture of her. Then, I saw that she has a whopping four writing credits assuming you count all three episodes of ABC Weekend Specials as one thing. Depressing.

I mean, don’t get me wrong—I liked the Ramona and Beezus movie that came out a few years ago, but it wasn’t exactly a smash hit. Ditto the 1988 Ramona TV series starring a nine-year-old Sarah Polley. But her publishing career was well over thirty years old before that first episode of ABC Weekend Specials got made. Judy Blume doesn’t have many more credits than that. L. M. Montgomery, Canada’s beloved, has about twenty-five, including a silent film, archive footage, and two anime. And not only is there a crapload of stuff based on Pippi Longstocking, but Astrid Lindgren dodged the whole thing by writing directly for the screen.

I think we’re getting some improvement, given the popularity of certain YA stories, but I’ve been thinking about the whole thing for years. Before Brave came out, a woman wrote an open letter suggesting that maybe Pixar might consider a movie where the main character was a girl who was not a princess. Riley of Inside Out is the first one they’ve ever had. Or Joy, if you’d rather. The thing that has stuck with me from the kerfuffle over that letter was a guy who said that the issue is that girls’ stories are for girls, and boys’ stories are universal.

Obviously, this is ridiculous. The belief is clearly there, though. Probably the most famous female author in the world is J. K. Rowling, who not only wrote a boy as her main character but submitted her book under her initials because it’s harder to get published as a woman.

The weird thing is that searching through Wikipedia under both “List of Young Adult Writers” and “List of Children’s Literature Writers” indicates that both fields have always had a ton of women writing in them. And, yes, Frances Hodgson Burnett has nearly sixty adaptations, going back to the silent era. And, yes, male author L. Frank Baum has even more than that, mostly revolving around female character Dorothy Gale. And, yes, even more depressing statistics can be found if we’re looking at authors, and characters, of color.

But most of my son’s viewing options on Netflix seem to have male characters. Or else princesses. I’m not inherently opposed to princesses; my favourite movie is about a princess who chooses duty over love, and my favourite Disney movie has a princess sleeping through a fair chunk of the picture. But why aren’t movies about girls given the attention that movies about boys are? How to Train Your Dragon did better than Tangled at the box office and got a sequel and a TV show. I’m not saying I want a sequel or a TV show, but I am saying that I thought Tangled was better. In 2010, The Karate Kid, a remake I was pretty sure no one wanted, was number eleven in the box office. Diary of a Wimpy Kid was forty-nine and The Sorceror’s Apprentice fifty. Marmaduke was eighty-six. Ramona and Beezus? One hundred one.

Okay, The Karate Kid was hyped. A lot. It starred Jackie Chan and one of Will Smith’s kids. I get that. But Diary of a Wimpy Kid? Starred “Lincoln Conspiracy Kid” from National Treasure: Book of Secrets. Ramona and Beezus had Disney Channel sensation Selena Gomez as one of its title characters. The Sorceror’s Apprentice did star Nicolas Cage, but is anyone even sure that’s helpful at the box office?

Yes, Diary of a Wimpy Kid was based on the popular book by Jeff Kinney. I get that. Beverly Cleary’s books aren’t really smash successes—these days. But why wasn’t Tommy Kirk playing Henry Huggins back in the ’50s? Fine, The Tale of Despereaux is by a woman, Kate DiCamillo, but it wasn’t very good and it tanked. Why hasn’t Ralph S. Mouse been given a proper chance?

The Sesame Street character Abby Cadabby, daughter of a fairy godmother, was created to sell merchandise. She’s pink, and she’s a fairy, and they felt this would do very nicely to interest little girls, since the Muppets do skew heavily male. Eventually, with all the retooling, she ended up with a regular animated segment about her adventures in “flying fairy school.” And this female character designed to appeal to little girls is one of three kids in her class. The other two are both male. Can’t have boys tuning out during those bits, can we? 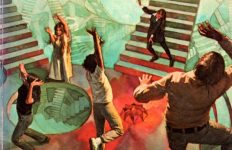 Year of the Month: Miller on HOUSE OF STAIRS→