They aren’t shown expressing the attraction for one another that the audience has for them. They certainly aren’t shown doing anything about that attraction. And that’s true, but it seems as though at least part of the issue is that women are allowed to have characterization beyond “I’m hot for the hero.”

About the only female movie character who is openly sexual and not shamed for it is Morticia Addams. She is also portrayed as being in a heteronormative relationship, and if she’s hot for anyone other than Gomez, it doesn’t matter, because the full force of her sexuality is Gomezsexual. Now, there is a lot more to Morticia Addams than sexuality, and any conversation with her reveals further depths. And that is a key difference—the writers, at least of The Addams Family and Addams Family Values, developed Morticia. She is a fully realized character.

We acknowledge that it’s bad for female characters to have their sole defining characteristic be “attraction to the hero.” What people may not think about is how often characters, even quite recently, existed with essentially the sole emotional arc of “attracted to the hero.” Even if they’re given more to do in the plot, they still don’t have a lot of characterization. The Shadow is definitely a lot more sexual than the MCU, regardless of the perpetual love interests, but Margo Lane’s entire personality is “psychic with the hots for Lamont Cranston.”

Maybe it’s not fair to pick on a silly action movie. So let’s look at The Fisher King. Mercedes Ruehl won an Oscar for her portrayal of a strong, fierce, independent woman . . . who was perfectly willing to let Jeff Bridges as Jack walk all over her. His character is vile, and she’s willing to give up her independence to wait on him. A lot of women won Oscars into the ’90s for playing that sort of role. These women could have sexuality, but only by sacrificing what made them interesting characters. And only aimed at Our Hero.

Male characters have started, rightly, being criticized for treating women like they’re disposable. They are expected to actually learn about the women they sleep with. Which means they’re sleeping with fewer women. The writers aren’t going to take the plot time to develop the characters. And when the women matter to the plot, they do, and the thing they have started sacrificing is sexuality. It isn’t driving the plot, so it goes overboard.

One of the issues also seems to be that writers don’t seem to know how to show two intelligent, well-developed people who are physically attracted to one another. They don’t know how to make them interact beyond tension. In some ways, this may tie back into the inability of writers to show a happy relationship that isn’t just the happy ending. How do you develop two characters as people and still show them sexually? And never mind Gomez and Morticia. Or, heck, Nick and Nora Charles—they were during the Code, and it’s still practically text that they were going at it whenever they could.

If the movies have become a sexy but sexless world, we can hope it’s because they’re putting more effort into other aspects of the female characters’ personalities. It isn’t always, but it does seem to be part of it. And, yes, we can hope for a world where Morticia Addams and Nora Charles are allowed to be around—funny, intelligent women with a genuine interest in sex. But if I have to make the choice between sexuality and personality, I know which I choose.

Help me hit the upcoming Halloween sales for my Morticia Addams decorating sense; consider supporting my Patreon or Ko-fi! 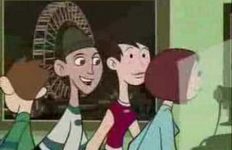