My sophomore English teacher, Mr. Garden, was obsessed with Thornton Wilder. Actually, he was obsessed with a lot of things, but any way you look at it, he’s why I’ve seen part or all of three productions of Our Town (I saw the Newman years later, not to mention the documentary OT, and those are arguably because of him as well). Plus The Skin of Our Teeth, in my opinion a better play but certainly a more obscure one. The one that stuck with my class the most was the 1977 TV version. In part this was because of Robby Benson’s idiosyncratic reading of the line “I want to be a farmer on Uncle Luke’s farm,” but also because Hal Holbrook was just a really good Stage Manager.

Really, Hal Holbrook has made an entire career of going deep into the American psyche. That’s pretty explicitly what Our Town is about, of course, but we are after all talking about a man who made large amounts of a career playing Abraham Lincoln and Mark Twain. As Wikipedia so helpfully phrases it, “He has portrayed Mark Twain longer than Samuel Langhorne Clemens did.” His first performance in the role was in 1954, and his most recent tour was after he turned eighty—older than Twain lived to be. Twain first used the pen name in 1863; that’s only forty-seven years of his life. Holbrook has been Twain off and on for well over fifty now.

And, of course, there’s his Abraham Lincoln. He played Lincoln both on the 1970s miniseries based on the Carl Sandburg biography and in both sections of the North and South miniseries. This is doubtless why he was cast in the Spielberg Lincoln—he’s too old by a lot to play Lincoln anymore, so instead, he was cast as Francis Preston Blair. (On a completely unrelated but I have to share note, one of the houses that is part of the compound now known as “the President’s Guest House” but often referred to as “Blair House” is the Peter Parker House.) His appearance in the film is unlikely to be coincidental; Spielberg is familiar enough with pop culture to have been deliberately paying tribute to a man who was such a notable Lincoln himself.

But beyond the historical figures—and remember, he’s also played John Adams and the voice of Ben Franklin, he was Deep Throat, and he’s narrated for Ken Burns—there is just something about Holbrook that makes us feel like he’s the quintessential American Elder. I didn’t like Into the Wild much, and I suspect that his Oscar nomination for the role was yet another “Oh, hey, we should nominate him; he’s old!” move on the part of the Academy. But his casting in it? That worked in no small part because he feels like the kind of old guy we should be taking advice from. You can just trust Hal Holbrook.

Sure, I routinely mix him up in my head with Hal Linden. It’s the first name; what do you do? But while Hal Linden is the kind of cop you wish there were more of, Hal Holbrook is closer to the kind of grandfather everyone wishes they had. Actually, there’s an extent to which he reminds me of one of my actual grandfathers, the one who was kind and gentle and wise. I don’t know if that’s really what Hal Holbrook is like, but it’s what he seems to be like based on his performances. And if that isn’t an insight into Americans’ perception of certain of their own historical figures, I don’t know what is. 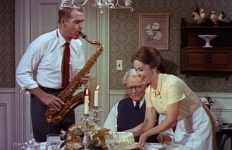 Attention Must Be Paid: Dan O’Herlihy→