One of the things I love best about the first generation of Soviet art is its often-expressed belief that, if the rest of the world could only see what life was like there, they, too, would join the international revolution. This was especially true, they thought, of America, a land of industry and of agriculture, a land of great potential that needed only contact with Russia to change its misconceptions of the country and of communism that were being propagated by their capitalist overseers. Pop culture reinforced this belief: adults had movies like The Extraordinary Adventures of Mr. West in the Land of the Bolsheviks, about a nerdy YMCA rep and his cowboy bodyguard (?) whose eyes are opened after a sightseeing tour; children had the popular Seussian work of Samuel Marshak, Mister Twister, about a racist American businessman whose daughter wants only one thing, “to go to the Soviet Union!” where their eyes, too, are opened (this was later adapted into an animated film.)

This belief was at least partly confirmed by the successes of early “tours” given to visiting artists, who were housed in fancy hotels and shuffled from one carefully chosen location to another like Gogol’s Khlestakov. Most fell for the act and came back to the States ready to defend the Soviet project; one of the biggest exceptions was E.E. Cummings, who managed to escape the tour and see the rot underneath (for which he was never forgiven by former comrades back in America). Another, albeit less unequivocal exception was the group of artists (and non-artists) associated with the Harlem Renaissance who, imported to Russia to help preach universal brotherhood by means of a joint project on the insidiousness of American racism, found the Soviet conception of these ideas too ridiculous to co-sign: it was less about universal brotherhood than about using them as pawns in a larger geopolitical struggle. The latter weren’t entirely dismissive, however, because the problems of Jim-Crow America were no illusion, and the Soviet project at least promised a different version of the world.

This theme, Russia as a safe haven against the bigotries of Western capitalist culture, represents the backbone of the film we’re discussing today, the 1936 musical dramedy Circus. As with other attempts to comment on racism and on American racism in particular, it’s both admirable and ridiculous, ambitious and misconceived, funny because it’s trying to make you laugh and funny because it’s trying to be serious, in short, it’s a mishmash of a film that’s worth engaging with either way.

Based (loosely) on a stage work by Russia’s great comic novelists Ilya Ilf and Evgeny Petrov1 and Petrov’s brother Valentin Kataev, Circus follows the adventures of “Marion Dixon,” an American “human bullet” circus performer whose terrible secret (an interracial baby!) finds her barely escaping the town of “Sunnyville” alive. Leaping aboard a train, she stumbles into the private car of impresario Franz von Kneishitz, a vampiric figure who will save her life and bring her around the world as a performer, but who keeps her as his virtual slave, abusing her verbally and physically, all while threatening to expose her secret and ruin her life all over again.

This is a romantic comedy! Sergei Stolyarov plays the love interest Ivan, a square-jawed towhead somewhere between Yuri Gagarin and Sergei Esenin in terms of looks,2 and whose main character trait is “unwavering decency.” There’s also a B-plot involving the circus director’s flighty daughter, her gangly fiancé, and a clown whose entire act is to be Charlie Chaplin. There are love-letters mistakenly read by the wrong recipients! There are mishaps that involve lions and cages! There are competing human-cannonball routines! There are… contractual obligations. It’s a very overstuffed affair.

But the star of the show is undoubtedly Lyubov Orlova as Marion. Circus wasn’t the film that launched Orlova — that would be 1935’s Jolly Fellows (aka Moscow Laughs) where she ran away with the movie — but it proved that her big introduction wasn’t a fluke, and practically guaranteed her canonization as the star of Soviet cinema during the Stalin years. Her very next film after Circus, the picaresque musical comedy Volga, Volga, became Stalin’s favorite; no movie star in the history of Russian cinema has enjoyed her level of popularity. Here she is in Circus dancing on top of a cannon:

I’ll confess that her performance in Circus is my least favorite of these three, largely because of what it asks of her. Orlova is not a particularly strong dramatic actress, but she’s a force of nature when it comes to song, comedy, and charisma. There are times where she gets to exercise the latter qualities to great effect here, but Circus often requires her to be a shrinking violet, a near-victim of lynching and perpetual victim of an abusive boss; granted, this works fine when she’s singing her grief, as in the lullaby she sings to her son (the mixed English-Russian “Sleep sweetly my baby”) or the melancholy recap of “Mary Believes in Miracles” when she believes she’s giving her last performance, but it also handicaps her greatest strengths for large stretches of the film. It’s also hard not to laugh at “Marion Dixon’s” utterly unconvincing attempts at English (like, “Sean Connery blowing off his Russian classes”-level stuff) and her doubly funny attempts to speak “broken” Russian. Suspend your disbelief as best you can.

There’s really only one actor who competes with Orlova for attention here: he’s three years old and doesn’t appear until halfway through the movie. His name is James Lloydovich Patterson, and before we get to him, I want to go back to that Harlem Renaissance story we discussed above. When the proposed film, Black and White, collapsed in 1932, not all of those invited to participate returned to America. Some stayed and tried to salvage an international anti-racism project of some sort, or even to soak up the sites and enjoy the experience of non-segregated public spaces. The best-known member of the team, Langston Hughes, took the opportunity to travel around Central Asia. Another, a young interior designer named Lloyd Patterson, married a Ukrainian painter and set designer named Vera Aralova, and it was the first of their three children, Dzheims (James), who was cast as Marion Dixon’s awful secret. It was the beginning of almost-lifelong celebrity for James, blessed (or doomed) to become a walking symbol of his country’s ideological project. James would grow up to become a mid-tier poet before returning, after his mother’s death, to the Pacific Northwest, where he still lives today (albeit in near-anonymity: the celebrity status didn’t come back with him).

The film’s climax is, of course, when the evil Kneishitz announces Marion’s awful secret in front of the entire circus audience. Terrified, devastated, Marion collapses in the wings, unaware that no one has taken Kneishitz seriously: this is the Soviet Union, man, that kind of thing doesn’t bother the international proletariat! The audience (read: “The People”) protects her baby, and the impresario is driven out of the tent to jeers and whistles. Then begins the film’s most famous sequence: to calm the terrified child, a woman in the audience begins singing a lullaby (“Sleep Has Come to the Doorway”), and then they pass him around so that each nationally representative group of audience members can sing the lullaby in their own language. It’s enough to give you a cavity but it is genuinely sweet,3 and the melody itself is gorgeous. We all learn an important lesson here: in the Soviet Union, we welcome children of all colors, be they white, black, red, zebra-striped, or polka-dotted, whatever (this is an actual line from the movie).

Then they all join in a parade to celebrate Stalin. This is still the Soviet 1930s, c’mon. 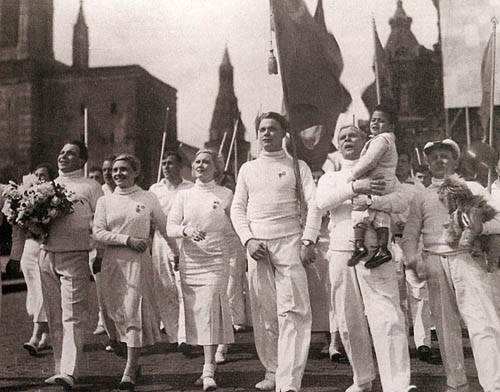 1. Ilf and Petrov are so funny that Mel Brooks adapted them. How many people has Mel Brooks adapted? (not parodied!) They were reportedly unhappy with changes make to their original script, and it’s certainly the case that the finished product isn’t quite as funny. An example: in an early scene in the movie, the circus director complains that a trained dog is too limited for his show: “He only knows three words: merci, bonjour, and fiddlesticks!” In the original play, it’s “love, fiddlesticks, and financial-inspector,” which is much funnier and a good example of how Ilf and Petrov found the comedy in everyday Soviet life (here: the ugly neo-portmanteau fininspektor). But, the dog’s owner complains, he was a big hit in Saratov!1

2. This is a joke: all these people look the same.

3. In so many ways, this scene captures the contradictions of Soviet anti-racism: it’s easy to laugh at the saccharine idealism here, but this kind of thing was frankly forbidden in the United States under the version of the Hollywood Production Code in effect in the 1930s. On the other hand, the section in Yiddish, performed by actor and anti-fascist activist Shloyme Mikhoels, was later removed from the film after Stalin ordered the assassination of Mikhoels amid a general policy shift towards state antisemitism.

1. I have in fact been to the circus in Saratov. No talking dogs.