Browse: Home / Disco Stu Returns, or Why Our Favourites Are Obscure

Disco Stu exists for one silly joke. Homer made a jacket that was supposed to say “Disco Stud,” but he ran out of room with the Bedazzler before he got the “D” on. Disco Stu doesn’t buy it at the Simpsons’ yard sale because “Disco Stu doesn’t advertise.” It’s a funny moment that is just leading up to the Bushes moving onto Evergreen Terrace; it doesn’t have any influence over the plot in any way. But they brought Disco Stu back for future episodes because he became, based on a single line, beloved. Some people even list him as their favourite Simpsons character.

But . . . why? When you’re asked who yours is, do you say Lisa? Or Marge? Apparently, the writers say basically no one tells them Bart or Homer and instead go with Duff Man or Dr. Marvin Monroe. They brought back Ralph Wiggum because the fans loved him even though they were worried that he was one dimensional. There’s a lot of minor characters on the show, goodness knows, and it’s extremely easy to pick one of them when you’re asked which character you like best. The question is why you’d come up with Frank Grimes first.

Part of it, honestly, is that it feels really obvious to go for a member of the main family. Even if you do like Lisa best, you may be tempted to say Bleeding Gums Murphy instead because you assume everyone says Lisa. If you’re actually talking to a writer for the show, there’s probably a certain amount of pressure to seem cool and exciting and mention Lyle Lanley instead of Maggie. You are in the moment, and if you thought about it for a while, you might say Grandpa, but because you’re on the spot, you say Jasper.

On the other hand, because there are all those minor characters, there’s always one who speaks to your specific interests. Hollis Hurlbut, with his microwave johnnycakes, might feel like the kind of person you’ve always wanted to be. You may be particularly fond of Belle’s bit about how her family has been in Springfield for six generations and so forth. And I mean, what’s not to love about Hans Moleman? Or Gil, who’s such a perfect Jack Lemmon-in-Glengarry Glen Ross? Maybe you’re fond of Absolutely Not A Mary Poppins Reference Shary Bobbins? There are huge numbers of choices depending on your tastes.

Now, it’s easiest to do this with The Simpsons because it’s an incredibly long-running show with literally hundreds of characters at this point. But it’s also possible to do with Muppets—my favourite Sesame Street Muppet is Prairie Dawn—or SNL sketches or anything that runs more than about a season. Yes, it’s easiest with things with literally decades of canon, but also my favourite Rockford Files character is probably Gandolph Fitch or maybe Peg Becker. I have a deep and abiding love of Maria, the stage manager of Slings & Arrows. (She’s not my favourite, because I’m a mentally ill woman who’s deeply into Paul Gross, but close enough?) Minor characters speak to us because they’re allowed to be as niche as we are ourselves. 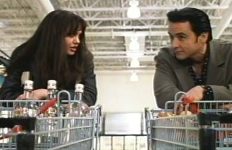