There is actually a strong argument that this is the first sequel produced by the Walt Disney Studios. Okay, there was Davy Crockett and the River Pirates, sequel to Davy Crockett, King of the Wild Frontier, but those are almost in a separate category, being fictionalizations of the life of a real person. Beyond that, there were no others. This, apparently, is because Walt hated sequels and wanted as little to do with them as possible. (One assumes that Roy was more kindly disposed, being the cash-eager of the pair!) On the other hand, they had gags they hadn’t used yet, so a sequel there turned out to be.

In the sequel, Professor Ned Brainard (Fred MacMurray) is back, now married at last to Betsy (Nancy Olson). Flubber hasn’t made him quite as rich as he’d hoped, so he’s continuing to experiment, hoping to come up with something new to benefit himself and, of course, good old Medfield College. However, he continues to be distracted, which irritates Betsy and makes her actually consider leaving him for his old rival, Professor Shelby Ashton (Elliott Reed). Meanwhile, Ned’s college sweetheart, Desiree de la Roche (Joanna Moore), is back in his life, and Betsy’s none too thrilled about that.

It is a curious fact that, pretty much whenever sports are involved in a Disney movie, so is cheating. We talked a couple of weeks ago about Blackbeard’s Ghost, but it’s far from unique. An example appears in this film, where the suits of the football team are inflated with “Flubbergas.” It’s not quite so famous as the bouncing basketball players of the first movie, but there it is. We’ll cover quite a few more incidences of this sort of thing as we go along, but the fact remains that the good guys are the ones cheating. As far as I can remember across the board; I’m not sure I remember any movie where it’s the bad guys cheating at sports.

Possibly this is because sports are seen as less important than whatever else is going on? After all, these are movies regarding scientific discovery. To a greater or lesser extent, it’s okay that Ned neglects his wife, his teaching obligations, and essentially everything else in his life in favour of the puttering that gave us Flubber. He’s doing it for the benefit of his country and possibly all mankind, and we can forgive eccentricity and absentmindedness for that!

It’s kind of delightful to me that the only character who merits their own Wikipedia page from this movie is villain Alonzo P. Hawk (Keenan Wynn). He’s in both of these movies and one of the Herbie ones, and the Wikipedia page points out that he played a couple of other similar villains while he was at it that just didn’t happen to have the name, though Disney was arguably doing cinematic universe long before anyone else.

Because Medfield College also gets its own page. Five Disney movies are set there. One is set in Medfield though not involving the college. And three others are set at colleges with a similar name that just might as well be Medfield, all things considered. This means that Kurt Russell as Dexter Riley and Tommy Kirk as Biff Hawk are connected, alumni of the same school. The first movie in that universe was made the same year that the Fantastic Four were created!

Interestingly, it’s also a Disney movie that involves the prospect of divorce. Betsy has got to know that going off with Shelby isn’t exactly innocent. He would love to marry her still. She’s just not sure she actually wants to leave Ned. I don’t think Ned is really aware enough of other people’s emotions to be aware that his marriage might be on the rocks, and Desiree is just an old friend with whom he’s having fun, right?

I mean, let’s be honest, the first one isn’t exactly high art, right? And a second made just so that they could finish using the jokes isn’t going to be an outstanding work of cinema, or at least it’s simply unlikely to be. But it’s a fun movie, and goodness knows there are worse out there. After all, Betsy is a strong, intelligent, independent woman who can hold her own against her essentially mad scientist husband, and that’s better than what we got in Million Dollar Duck. 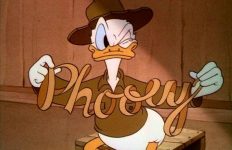