Desperado is Robert Rodriguez’s first “real” movie, shot with a “real” budget of $7 million and with no creative obligation other than “Robert Rodriguez felt like doing it”. It functions as both a sequel and a remake of the first film – the events of the first film definitely happened, but there are so many scenes and characters in this film who feel like a do-over of something or someone from El Mariachi. At the same time, the film shows the direction Rodriguez would head in the future.

Tonally, the film is actually closer to the hangout vibe of Roadracers than it is the relentless engine of El Mariachi. El has one specific goal he’s working towards all movie – kill the drug dealer known as Bucho – but he and we are willing to follow digressions along the path. There’s a touch of influence from Rodriguez’s new friend Quentin Tarantino (who cameos as Pick Up Guy) in the way Rodriguez is willing to follow a naturalistic conversation down whatever road it goes.

The action scenes are where Rodriguez’s true potential comes forth. The Hollywood budget means he can finally throw in giant explosions, complex gunfights with funny business (bad guys have to reload!), and most of all the ridiculous and occasionally hilarious set, prop, and sound design – my favourite being the shit-smeared toilet that hides a secret back room. Rodriguez’s disdain for laziness and money as a solution to problems now, ironically, has the money to actually deliver that theme – Bucho’s men enthuse over his new, expensive, bulletproof limosine, but it turns out to be useless against El and his cheaper enemies.

Antonio Banderas replaces Carlos Gallardo as El Mariachi (though Gallardo has a cameo as one of El’s friends), and it’s exactly the right role to propel Banderas to fame in America. El is still the scrappy survivor, and Banderas happily delivers the right mix of badass strength and sweaty panic. But he now has a history as a survivor, and Banderas conveys the weary sadness of a man who’s permanently set up shop on a knife’s edge.

The other cast members both round out what would become Rodriguez’s stock company of actors – Salma Hayek returns at El’s love interest Carolina, Cheech Marin plays an evil bartender, and Danny Trejo plays a cartel hitman sent to help kill El – as well as reveal one of Rodriguez’s big weaknesses: a callous indifference to his characters. One of his cost-cutting measures is to only hire an actor for so many days, and just shoot all their scenes in one burst; Steve Buscemi was hired for a full week’s worth of shooting and Cheech Marin was hired for six days. This would be fine if they actually fit into the story in any meaningful way, but characters tend to show up just to die. Tarantino shows up, tells a joke, and gets shot in the face. Buscemi criticises El’s goals, randomly gets shot, and doesn’t even get a roaring rampage of revenge in his name.

Still, if you can get in the ridiculous semi-parodic mindset of the film, it’s some good fun. Rodriguez observed that people didn’t get that El Mariachi was supposed to be a parody of action films, blaming the fact that it was Spanish and in subtitles, giving people an expectation that it was really intellectual, and chose to stick in more and bigger gags (though my favourite is the subtlest, when he cuts from El’s ridiculous action antics to a previously unseen Buscemi’s shocked reaction). To fully enjoy the movie, you need to be able to take on Rodriguez’s rather relaxed attitude to the situation, and seeing as how this was the film that launched him from bad boy of the indie festivals to Hollywood player, it seems a lot of people were able to. 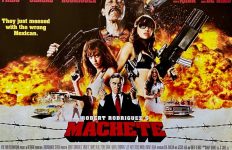