Gemini is less a film and more a lethargic, washed-out imitation of one. It’s movie-ish.

This pallid pattern of light and shadow centers on Jill (Lola Kirke) and Heather (a wasted Zoë Kravitz, so drained of her usual charisma that she was clearly attacked by a vampire mere moments before filming). Heather is a purportedly famous movie star who seems to be suffering from some sort of unspecified low-grade depression–Jill alludes vaguely to her going through a hard time–and anxiety. Jill is her personal assistant and her friend, in the slightly parasitic, unequal way of Hollywood; it’s hard to say how much of their relationship is real and how much is just another kind of performance. Heather’s reliance on her stems partly from a total avoidance of any conflict. When she pulls out of a film soon before it starts shooting, knowing that it won’t be able to go forward without her name attached, she sends Jill to do the dirty work of telling the director (Nelson Franklin, one of the few people in the movie who appears to be awake) while she hides out in the car until the coast is clear. Jill tries to blow off a bubbly, intrusive superfan, Sierra (Jessica Parker Kennedy), on Heather’s behalf, but Heather is almost incapable of drawing any of those boundaries for herself. When she has to interact with Sierra, she passively agrees to everything–sure, they can take a picture; sure, they can take a second picture without the flash–and only flares up when Sierra asks her if it’s true that she’s now dating Jill.

She is not, in fact, dating Jill; she’s dating Tracy (Greta Lee). Her ex is Devin (Reeve Carney), who radiates a kind of smug early-2000s douchery, collects coins, and is purportedly violent, attributes which make him feel like a character assembled by Mad Libs. Heather’s desire to keep her relationship with Tracy under wraps suggests that her bisexuality would come as a surprise to the media, but the film is too sleepy for this to ever become relevant.

Heather asks if she can borrow Jill’s gun because she’s made so many people mad lately, and Jill reluctantly gives in. In a series of questionable decisions, she not only gives Heather the gun but loads it for her, so this actress whose only firearm qualification is having fired prop guns in two movies can carry a loaded gun around in her purse. Jill then considers taking the gun back, only to accidentally fire it herself. At this point, you begin to realize that the true mystery of this film is how these two have survived so long.

Of course, then Jill finds Heather’s body. She’s been shot four times with Jill’s gun, which has Jill’s fingerprints on the bullets; Jill’s hands test positive for gunshot residue. Jill senses that the police are, understandably, pretty satisfied with all this, so she dyes her hair in an attempt at a disguise and bums around town quizzing Heather’s friends about their whereabouts and hiding in closets to eavesdrop on them. Meanwhile, John Cho–running neck-and-neck with Zoë Kravitz in the movie’s attempt to brutally suppress everyone’s talent and charm–plays a detective who trails around after Jill and politely keeps informing her that they’re about to arrest her so that she knows when to run. Thanks, John Cho!

The movie doles out its foreshadowing and red herrings in lumpen bits of dialogue and countless scenes of people failing to have peripheral vision. This is a failure of construction on director Aaron Katz’s part, but the biggest fumble here is the landing. It’s not so much that Katz sticks it as that it’s not a landing at all, just a fall and a dull thud as plot hits credits. There is a complete failure to offer interest, entertainment, or insight, and so a film that gestured at being a blend of Gone Girl and Clouds of Sils Maria winds up damply fizzing out, too busy trying to deserve a tasteful poster to succeed at deserving anyone’s time.

Gemini is streaming on Hulu. 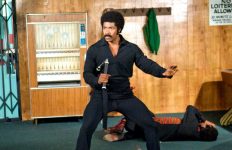