Browse: Home / Film on the Internet: THE LIFE AQUATIC WITH STEVE ZISSOU

Funny and melancholy and tender and wonderstruck, The Life Aquatic with Steve Zissou works wonderfully both as a film in its own right and as an encapsulation of everything Wes Anderson does. It’s an aquatic road trip centering on the weary midlife crisis of a sub-Jacques Cousteau type, a man who has gone from being vigorously larger than life to being smaller than his own legend, a man confronted with an adult son who is a stranger to him. This realistic set of emotional dilemmas is hyper-charged, saturated with Anderson’s attention to color and whimsy. (I usually can’t use the word “whimsy” without either gritting my teeth or rolling my eyes, but Anderson pulls it off.) The adult son, Ned (Owen Wilson), is a pilot for “Kentucky Airlines.” Steve Zissou (Bill Murray) is on a quest to kill–or at least fight–the possibly fantastical jaguar shark who ate his best friend. They travel on an elaborate boat with an on-staff Swedish masseuse, sailing through an ocean saturated with lovingly handcrafted imaginary fish; they execute a daring raid on a rival’s (Jeff Goldblum) research station and encounter pirates. No one else could have made this movie or even thought of it. They certainly wouldn’t have scored it with, among other things, David Bowie songs sung in Portuguese.

It all comes together amazingly well. Anderson is, in his strange way, both a maximalist and a minimalist. He wants to do everything and to do it on an emotionally outsized scale: he wants adventure and color and a drama that plays out with life and death stakes and stylized language. He does all of that, but he does it via a massive accumulation of tiny, intricate details and an attention to the real emotions of his collection of tattered cynics and shining idealists and hard-bitten realists. Those two styles blend to particularly great effect here, making this possibly my new favorite Anderson movie.

Other pleasures: Willem Dafoe’s exuberant vulnerability as Klaus Daimler, the Team Zissou member who desperately wants Zissou’s fatherly love and approval; a cascade of unpaid interns who have to share a Glock; Anjelica Houston and Cate Blanchett, imbuing relative levelheadedness with a kind of ethereal strangeness, projecting a sense of reality to their characters even in a film centered on the emotional lives of the men at its core; the fact that the earnest bond company employee is referred to, derisively and fondly and matter-of-factly, as “Bond Company Stooge”; the Bowie; and considerable quotability (“Who the shit is Kingsley Zissou?”).

The Life Aquatic with Steve Zissou is streaming on Amazon Prime. 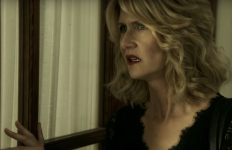