With no direct evidence for this, I think the Academy looked around in late 2006 and came to the inescapable realization that, with the death of Robert Altman, they couldn’t just sit around forever and not give awards to Martin Scorsese, what with man being a mortal creature and all.  So they spun around and gave him his first Best Picture and first Best Director Oscars for The Departed, which was probably the worst thing that could have been done for its reputation, making it the But It’s Not His Best (And Come On, That Last Shot?) film.

Of course The Departed isn’t Scorsese’s best, but the not-best of Scorsese still comes in at a higher level of cinema than 94.51% of the work of everyone else.  Drawing from the Hong Kong action film Infernal Affairs and the real-life story of South Boston mobster Whitey Bulger (a story to be told more directly in the upcoming Black Mass), The Departed is a fast, brutal, profane riff on Scorsesean themes of loyalty and the lives of urban criminals, centered in Boston rather than New York.   Leonardo diCaprio plays a cop undercover in the mob, Matt Damon plays a mole for the mob in the cops, Jack Nicholson plays the criminal equivalent of Jack Nicholson (a former legend who’s beginning to lose his control and power), Ray Winstone owns shit (he’s a former boxer and there are few actors who punch so convincingly), Martin Sheen breaks your heart, Vera Farmiga holds her own, Anthony Anderson and James Badge Dale do some great work in small roles, and Mark Wahlberg and Alec Baldwin (“Ineedasmokeanyoneneedasmokeyoudon’tsmokewhatareyouoneofthosefitnessfreaksgofuckyourself”) steal every scene that doesn’t have 24-hour armed security patrols.  Through all of this, Scorsese pulls just about every director’s trick imaginable in a way that feels completely intuitive (watch how the end of a scene often overlaps into the next) and like he’s been influenced by the filmmakers he influenced.  He still feels like America’s youngest director.

Ship up to Boston with The Departed at 8pm Eastern and Pacific on HBO Signature.

Hilarity, Heartbreak, and HITMAN (Part 1 of 2)→ 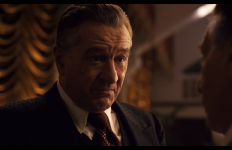