It turns out that, if I’d ever actually met him, he would have apologized to me. Because he apologized to people who were disappointed in Batman and Robin, especially if they’d liked Batman Forever. He acknowledged that studio interference had a lot to do with the final appearance of the film, but he also admitted that he as director took a certain amount of the blame. It was, he said, his name on the movie in the end, and while I’m not a fan of auteur theory, I can definitely see his point. The studio may have pushed things in a direction, may even have been the ones at the reins for the most part, but he was part of the process as well.

Initially, he studied fashion design. Then realized what he really loved was film. He shifted into costume design, then script writing, then directing. He earned a Masters in Fine Arts while actually working in the film industry; in a way, he was extremely lucky, because from what I’ve read he basically stepped from fashion to film and was immediately working on movies you’ve heard of, even if, in at least one case, you’ve only heard of it because it came up in The Dissolve’s first LoveFest.

Honestly, even if he’d never had his blockbuster phase—and we’ll get to that in a minute—he had the kind of Hollywood career that means I might have gotten to writing about him one of these years, possibly for Pride in five years. He did the costumes for The Last of Sheila, written by Stephen Sondheim and Anthony Perkins. He wrote Car Wash, a movie I genuinely like, and the screenplay of The Wiz. And oh my goodness The Lost Boys do not even get me started. I’m not sure where my copy is at the moment and I’m a bit heartbroken about that, because it’s hot and I’m tired and that’s an ideal time to watch that wonderful and silly movie.

And, yes, twenty-five years ago this summer I saw Batman Forever in the theatre twice. I’m not even sorry about that, though there was probably at least one movie that came out that summer tha I might wish I’d seen as well if I’d stopped to think about it. (I had a job that summer for the first time; it could’ve been “as well” and not “instead” even without steady babysitting money.) I bought the soundtrack, and I’m pleased to have done so. It’s around here somewhere still. I’ve updated to a DVD copy, even if I’ve still never actually seen Batman and Robin.

Okay, so I also really hate his version of The Phantom of the Opera, I have to admit, and I’ve written before about my love for the original stage show. Most of my hatred is for the casting, with a little bit leftover for the makeup and how they changed the sequence of events. But honestly, if the only three movies he’d ever had his name on in his life were Car Wash, The Lost Boys, and Batman Forever, or even just the soundtracks of those last two, he would be someone I’d force myself to write about despite not having a lot of concentration today. 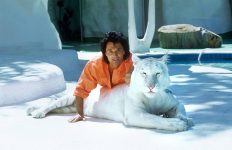