With a little thought, I believe I could come up with a list of maybe a dozen movies that, if you got enough people of my generation together, we could recite. In part, this is because we grew up with slightly different access to movies—enough so there were some we could see as often as we wanted, but not enough so that we could just watch anything whenever. However, I also believe it’s because the movies of my generation placed a strangely high value on being quotable. I don’t know if it was deliberate, but it certainly happened.

I would posit that the oldest of these, and possibly the reason so many other movies developed the pattern, is Monty Python and the Holy Grail. Everything from the moose biting the credit translator’s sister through to the cops leading the Knights of the Round Table off at the end has come up in conversation at least once in the twenty years since I saw it first. I suspect that those who saw it before I did have just been quoting it longer. I’ve also, of course, heard the argument—and it’s pretty much true—that quoting Monty Python over and over again is just the opposite of the kind of humour Monty Python actually did, but that’s never stopped anyone.

But there really was something about the movies of the ’80s and ’90s, I think. What amused me about the comments of the My Year of Flops article about Mystery Men was all the people who disliked the movie but had to admit that “this one line” was really funny, and about half the movie got quoted as “this one line.” I could quote Ghostbusters before I’d ever actually seen it. And in certain circles, responding to someone’s announcement of an upcoming event with “I’d just like to wish you good luck; we’re all counting on you” is downright Pavlovian, and I’m pretty sure some of the people who say it have never even seen Airplane!

I don’t know; maybe it’s the circles I travel in. But even the younger people I spend time with don’t seem to quote the movies of that period in their own lives. Yes, when there’s overlap—the ones who first saw Austin Powers far too young, for example—but mostly, no. And the older ones? Are quoting The Princess Bride, not The Prisoner of Zenda. Okay, in both cases, there are a few in either direction. Most of my friends know at least a few Dr. Strangelove quotes, and most of them know at least a few quotes from somewhere in the Marvel Cinematic Universe or recent Coen Brothers movies. But the reciting thing? That’s tied to a very specific era.

It’s no surprise, I suppose, that the most quotable show in the history of television got its start when I was in junior high. I must confess that I haven’t actually sat down and watched The Simpsons much in a very long time. (I wouldn’t mind owning a few seasons on DVD, but I don’t yet.) On the other hand, I’d say not a week goes by that I don’t quote the show at least once. Probably more often than that. I’ll admit I have a few go-to quotes, as I’m sure most of us do, but there are plenty of references that suggest themselves out of the blue.

I don’t know where I’m going with this, really. I don’t know what any of this means. Maybe it’s how saturated we were in a narrow range of pop culture. My generation emerged from the three channels paradigm of television, where our parents grew up, to having more channels to watch than we know what to do with, plus Netflix, plus YouTube, plus plus plus. But we hit that sweet spot, I think, where there was really media aimed at us that we could consume as often as we wanted to. And it became kind of a touchstone for us. This is why we get all weird about our childhoods in ways our parents didn’t, I think. You think my mother said her childhood was raped when they made a Car 54, Where Are You? movie? She did not! Because she kind of didn’t care.

I think it’s an echo chamber. We started quoting, and they made things we’d quote, and soon, we could all recite The Muppet Movie. Heck, the only Dickens I can recite, I know because it’s in The Muppet Christmas Carol. And then suddenly, comedy became about referencing the things we already knew, and you couldn’t quote the meta reference.

Then again, I think we may also be the first generation to analyze our pop culture the way we do, and I think we’ve gotten some pretty decent writing out of that, so I guess that’s something, right?

Eighteen Movie And TV Quotes You Have to Shout–Number Nine Will Have You Dancing!→ 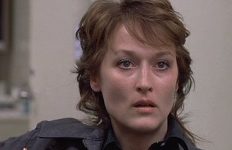