So I went to see Gone With the Wind this weekend. I have wanted to see it in the theatre since, I don’t know, junior high? And the seventy-fifth anniversary is in December, and I’ve planned to write a piece about that. What with one thing and another, there we were, me and a friend. Theatre goes dark. Robert Osborne gave us some basic information, and the entrance music began. We’re not even talking credits. We’re talking black screen with music playing. My friend and I continued our conversation, and a guy in the row ahead of us told us to stop talking.

I’ve been yelled at for talking during trailers before, too. Not often, but I know Richard Roeper pretty well thinks you should be taken out and shot for talking during trailers. I even, nearly twenty years ago, had a roommate who said something about how The Rocky Horror Picture Show was a pretty good movie when people weren’t talking over it all the time, which was just so rude of us! Clearly, this is a complicated issue.

I think the rules are different if you’re at home, of course. The only way I got through the third hour of Barry Lyndon was by joking about it with my best friend. On the other hand, a group of us watched Breakfast at Tiffany’s the night before the Super Bowl a few years ago, and my half-Japanese friend will never actually get to experience watching Breakfast at Tiffany’s. Another friend was very drunk and very loud and telling us in detail no one cared about that he had played high school football, and here’s everything about that. So all my half-Japanese friend got out of it was Mickey Rooney, and he doesn’t think the rest of the movie can overpower that.

So I guess the rule is that you should respect the comfort of the people around you. Based on the noise level in that theatre Sunday, I suspect that most of the people there were just fine with talking over the entrance music, which is reasonable, since that’s what it was written for. As the name kind of implies, it’s the music that played when everyone was getting settled. In that case, I think the guy in the row in front of us needed to suck it.

On the other hand, my drunk friend needed to shut up. (He did later apologize to everyone concerned.) Similarly, a different former roommate deserved the irritation she got from everyone around her from the at least two different stories I know of her acting inappropriately in theatres. Especially since one of them was Schindler’s List. Even in the home, “I’m trying to watch this” should be respected if you’re watching a movie.

Trailers? You have my blessing to talk. Isn’t half the point of trailers to decide if you’re going to go see the movie with the person beside you? (Actually, I have a pretty funny story about that drunk friend regarding trailers. We went to see Inception, and because we got there kind of late, and the theatre was pretty crowded, our group split up. One of the trailers started playing, and there was a kind of anticipatory murmur as various people clearly thought it seemed interesting. And then, the screen flashed, “From the mind of M. Knight Shyamalan,” and the entire theatre, pretty well in unison, went, “Oh, God.” Laughter. My friend, from across the theatre, called in his sarcastic voice, “Hey, it could still be good!” Further laughter.) I mean, if it’s one of those trailers that’s the reason some people with more disposable income than I have go to see movies in the first place, you might respect that and keep it down, but the seventh time you’ve seen a trailer for the same Wayans Brothers movie? No one really cares.

The social contract of the theatre is that you don’t interrupt the movie, but no one cares when you start talking over the end credits. Half the people are on their way out the door already, even if it’s a Marvel movie and you know there’s more to come, because who are all these people who leave before the credits of Marvel movies are over? If there’s a reasonable expectation of people in motion, you’re not being more disruptive by talking. Go for it.

Please, talk over that stupid “here are some shows on TNT” promo. No one cares, even the people who actually watch the shows.

At home? Respect the needs and wishes of the other people watching the movie. Trust me—no one cares about your glory days on the high school football team.

Oh, and here’s the kicker. That guy in the row in front of us? Occasionally leaned over and said something to his friends during the movie. 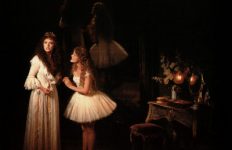 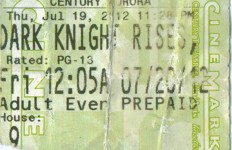 Protection No More Substantial Than the Shadows on the Screen→ 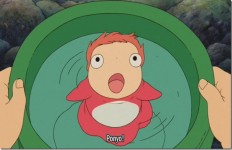 Getting Your Seat Kicked Through PONYO—Children and the Theatrical Experience→