Quarantine being lifted means we can look back, summarise what it all was, and safely define it, and that’s going to be really useful to learn from for when the second wave of COVID-19 comes crashing down on us in like a week. More relevantly to this site, we can compare and contrast the story of COVID-19 to other stories. The most obvious and most notable aspect of this whole situation has been the bizarre American response to the crisis, as large swathes of the country became convinced that the virus was a combination of an attempt on the behalf of the Chinese government to destroy America and wholly exaggerated by a conspiracy between the medical field, the mainstream media, and Democrats to oppress Americans. The combination of scientific illiteracy, historical illiteracy, overwhelming arrogance, laziness, and complete distrust of any authority that asks one to put the slightest effort and self-sacrifice in; it would be cheap to compare these people to the depraved protagonists of It’s Always Sunny In Philadelphia, so call me a three dollar matinee. Here in Australia, your bog-standard conservatives – hating gays, poor people, and immigrants as much as any American conservative – were some of the loudest proponents of quarantine, genuinely believing in the concept of communal responsibility, which only made the endless babbling of Americans who were, at their most sane, incapable of conceiving that their desire for haircuts, conversation with strangers, and conception of themselves as free individuals was shortsighted, stupid, and completely pointless even without potentially leading to the death of others and themselves. I can’t count the number of times I saw pictures of Facebook posts from people convinced the crisis was one of the things I said followed by a followup of a report of their death by COVID-19. The big thing that gets me – and is the big similarity to Always Sunny – is the opportunism of the stupidity. One of the things that makes the show so funny to me is how the characters can and do switch gears at the drop of a hat; the Gang can go from zero to a hundred on a stupid idea (“The morgue? Hear me out–” / “SOLD!”), and they’ll drop it just as fast when it becomes too much work to keep up with, moving onto another stupid idea with a flimsy justification. Their ideas are nothing more than justifying what they want to do in the moment, and that’s horrifically familiar.

What are some stories you think summarise the story of the 2020 quarantine? 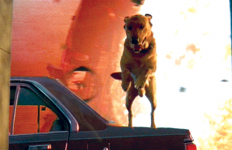 Taco Break: Does the Dog Die?→