This week You Will Learn…

Send articles throughout the next week to ploughmanplods [at] gmail, post articles from the past week below for discussion and Have a Happy Friday!

The Ringer‘s Lex Pryor considers what’s next for James Bond after No Time to Die, and how the character’s origins limit the prospects:

James Bond was never supposed to be a good guy. The character was created by Ian Fleming, a wealthy white British man, at least in part out of dissatisfaction with his station in life. Ann Charteris, whom Fleming married after nearly 20 years of on-and-off dating, came from wealth and cheated on him regularly. In an age and society defined by the near autocratic control of husband over wife, Charteris carved out a space of relative autonomy. In turn, Fleming hoped to create his own domain on the page. Bond and the world he occupies are, at their roots, best understood as extensions of Fleming’s fantasies, the plaything of a man incapable of dominating his domestic partnership with the patriarchal vigor of his dreams.

For Hyperallergic, Dan Schindal takes the occasion of Bill Morrison’s new documentary The Village Detective: A Song Cycle to talk about his series of films investigating the origins of found reels of film:

Morrison constructs his films — such as Decasia (2002) and The Great Flood (2013) — from raw, unrestored fragments of celluloid. In 2016’s Dawson City: Frozen Time, he told the story of a much more exciting rediscovery, how hundreds of lost films were dug up from under a skating rink in the Yukon. He showcases the images of these movies with every scratch, fade, and blur included. Each film print records two stories: the one a crew conjured together however long ago, and the record of everything that’s happened to the strip since its creation. The vagaries of the projection, transportation, and preservation of physical film leave it vulnerable to damage. Many archival projects focus on the first story, but Morrison is interested in both. Cinema is an illusion of life, but in letting imperfections intrude upon the experience, he turns these illusions into specters, or memories. The past is both dead and present.

Chastain’s versatility has made for a career that is hard to sum up into a type. While some actors seem to return to the same persona, she skips between a collection of them. Sometimes, as in her Oscar-nominated turn in Zero Dark Thirty, she plays type-A women in charge. Or, as in her recent film The Eyes of Tammy Faye, she embodies a form of campy, often southern-flavored femininity. Then there’s Scenes From a Marriage, which just concluded its run on HBO and serves to remind you she can do staid, naturalistic prestige (did you know she went to Juilliard?). These personas recur throughout her filmography with slight tweaks, as if some of her performances were reacting to the ones that came before, either doubling down on something that worked or pulling against it. In between credits, she appears on social media, posting inscrutable, staged happenings (there is no English-language word to describe these videos), often with famous friends, that present a person who is both accessible and unknowable. Indeed, if one is to understand Chastain’s work as a whole, it requires resolving all the contradictory impulses that she follows on-camera, large and small. To arrive at a grand unified theory of Jessica Chastain, if physics allows for such a possibility, one must consider a wide variety of her screen moments. And we are here to do just that.

What that “something bad” turns out to be rearranges all the elements of Mulholland Drive. The passion Rita and Betty grow to feel for each other, and the steamy chemistry Watts and Harring share. The creative bankruptcy Adam accepts for the promise of a payday, and the self-satisfied smugness Theroux injects into his character. The meaning of “This is all a tape recording,” a meta reveal from Club Silencio’s magician (Richard Green) that refers to more than just the performance Rita and Betty watch when they visit the venue. These disparate puzzle pieces mostly fit together like that blue cube and key, except for one: the diner scene.

Gemma Gracewood for Letterboxd News dives into the cast and crew connections between decades of native filmmaking and the FX series Reservation Dogs:

To arrive on the small screen with a fully formed voice, there needs to have been a place to warm that voice up, and it’s more often been in the world of independent film that these opportunities lie for Indigenous artists. [Taika] Waititi, the starrier of the two creators, whose feature works range from the awkward romance of Eagle vs Shark through to next year’s Thor: Love and Thunder, has certainly injected a careful balance of humor and emotion into the series. From his filmography, Reservation Dogs most resembles his 2010 semi-autobiographical comedy, Boy. But at heart, it is Harjo’s show—set in his home community of Oklahoma, and the culmination of fifteen years of filmmaking that serve as a calling card to its themes. 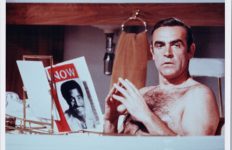