Rather than face the embarrassment of admitting its shirt is on backwards, the FAR has re-affixed its head to face what was formerly the rearview. This resulted in a wonderful perspective on Eastern animation history, an infamous yet inspiring musical, a long-standing acting career, a classic docs and sitcoms, and punk rock opinions.

Thanks to Casper and Ruck Cohlchez for contributing this week, we honor them and never look back. Send articles throughout the next week to ploughmanplods [at] gmail, post articles from the past week below for discussion, and Have a Happy Friday!

Little White Lies reports on an online retrospective of golden age Chinese animation, featuring shorts and features in mediums including traditional cel animation, watercolors, cut-outs, and stop-motion (programming note – the video links appear to be for viewers in the UK, and I’ve heard some browsers get a little confused about geography):

Feeling from Mountains and Water, made in 1988, was Te’s final film and the last by the original crop of animation leaders from Shanghai Animation Film Studio’s golden age. (Following his arrest, Te was forced into exile and his career was put on hold.) It is perhaps the greatest realisation of his singular water-and-ink style. As with Where is Mama, Te’s choice of subject matter chimes perfectly with his fluid animation. Notably, he also intentionally leaves the hand of the artist on full display, so imperfections such as smudges or slightly rough brushstrokes become part of the film’s texture.

For Talkhouse, Mark Cira talks about how Elaine May’s uncompromised bomb Ishtar inspired him as a high school anarchist:

Unfortunately, stories of leading man Warren Beatty and cinematographer Vittorio Storaro ganging up on May on her own film set doesn’t come as a surprise to me. When a woman is forthright in her vision, she is “inflexible”; when a man is, he is an auteur. For May, her auteurship had been under threat ever since she started directing. Her debut film, A New Leaf, was taken away from her, then she had to fight tooth and nail to regain final cut on her hugely underrated dark comedy Mikey and Nicky (1976). You can still see her brilliance shine through in those pictures. But Ishtar is Elaine May going down in a blaze of glory, an unknowing martyr for her weird and singular vision. Though May and her film were derided and attacked by both the public and the industry, Ishtar works perfectly as a countercultural statement. It feels like a big, funny “fuck you” to the establishment that tried to keep her down the same way imperialist military establishments try to keep down more vulnerable countries.

Will Harris and The AV Club give Hector Elizondo the Random Roles treatment. Don’t worry about the lengthy Last Man Standing discussion up front, they leave plenty of time for the important stuff like Fish Police (…as well as Solute favorites The Taking of Pelham 1-2-3 and Columbo):

I’m looking at a poster somebody sent me for The Taking of Pelham 1-2-3, where I met the wonderful Walter Matthau, and we were having a chat… Well, he was actually giving me his two-minute lecture on why I shouldn’t smoke the cigar I was about to light! He’d had to stop smoking because he’d had a heart attack, and he was convinced that smoking was one of the reasons why he’d had it. He was tall, very laconic, and he was just a particular kind of man. So he says, “So listen, pal… Are you gonna light that thing?” And I said, “I have a feeling I’m not going to, Walter. I don’t think that’s gonna be good for my career!”

And upon my saying that word, he said, ‘Whaddaya mean ‘career’? Lemme tell ya something else! Don’t have a career. Have jobs.” “Jobs?” “Yeah, a career is like having a moving part. You can lose it… like your hair! But a job… If you’re happy, you do a good job, and if you do a good job, you can’t lose it. And one job will lead to another job, and then you’ll have something much more important than a career.” “What’s that, Mr. Matthau?” “A reputation. That’ll get you further. If you’re a good person, if you’re professional, you’ll be someone that people like to work with, just because you’re you. And when they look at the list, maybe they’ll say, ‘I want to work with him, because I know the job’s gonna be good, and it’ll make the day shorter.’”

At Reverse Shot, Nadine Zylberberg recalls the pleasures and wonders of Agnès Varda’s The Gleaners and I:

I learned then just how useful a camera can be in not only creating worlds but discovering ones that already exist, just out of view. That surely contributed to my creeping sense of shame: Why didn’t I recognize the gleaners (dumpster divers, beach combers) in my city? What happened to my trash after I threw it out—and why didn’t I care? Gleaners was formative in my understanding of the power, as well as the subversive nature, of documentary. How, in showing a different but very real world, it can inspire deep reflections about one’s own. That said, I also remember the whimsy with which Varda traveled the country, playing private games with trucks along the highway, pretending to trap them with her hand in front of the camera, or marveling at a spot of mold on her ceiling, likening it to an abstract landscape painting worthy of framing. She gleaned for herself, picking fig after fig off a tree, taking one juicy bite before tossing it with glee. Perhaps her documentary wasn’t meant to inspire shame, but humility. And, in doing so, it recontextualized my experience with all the French cinema that I had seen before, expanding definitions of beauty and humor and what it is to capture an experience, real or imagined, unapologetically.

Hyperallergic‘s Juan Barquin questions the effectiveness of the classic show recreations on WandaVision:

Some critics have argued that the pastiche is formulaic on purpose, a sincere reflection of the boring comforts of mainstream television. But this is insulting both to the creators of the iconic imagery that WandaVision pulls from and the audience that loves it. It also undercuts the show’s theme of processing trauma through nostalgia. The implication is that shows made for comfort are somehow automatically lesser than contemporary “prestige” TV. If that were the case, the series wouldn’t have dedicated so much energy to recreating imagery from those works. But this recreation is akin to a Disney World ride, with cast members wailing catchphrases at guests. Every single thing in the show is telegraphed, all while nudging the viewer about the references. Is there any reason to watch WandaVision when we could simply revisit the shows it claims to love instead?

And Eugene S. Robinson on his substack asks five questions to rocker/producer Steve Albini – but allows none about music:

[Albini] The older I get the less certain I am of some things, the more obvious others seem. One that has become clear over time is that nobody deserves your attention, you dole it out and you can decide who deserves it. The idea that we can remove the artist from the art means that art isn’t communicating anything after all, it’s just decoration,  an amusement. 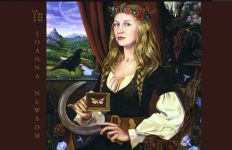 Year of the Month: The Disorientation of Joanna Newsom’s YS→