Thanks to scb0212 and Casper for contributing this week. Send articles throughout the next week to ploughmanplods [at] gmail, post articles from the past week below for discussion and Have a Happy Friday!

Every director that does a movie wishes he or she had another week. They all want more time. Time is everything. So, I wish I’d have had another week, but I’m really not complaining. I think we told the complete story in the time we had. It’s a tribute to the actors that it went smoothly. I’m very indebted to the cast. Nobody was ever late, they always knew the lines, there were no disputes about the way I wanted to stage things. It went very smoothly in front of the camera. Behind the camera, with the financial elements, there was, shall we say, some excitement, but it worked out.

At The Reveal, Scott Tobias rewatches all five Final Destination movies and ranks them “in order from numbing to utterly deflating”:

Arriving at the turn of the century, as if by prophecy, the Final Destination franchise plays like a dark generational touchstone, entertainment for young people who feel they have no control over their fate, even if they have the insight to see what’s coming. Death does not come through supernatural phenomena like monsters or ghosts, and it doesn’t come through human vendettas, either, like a psychopath with a mask and a knife. The series dovetailed neatly with the Saw franchise, which at least had a sadistic ringmaster, “Jigsaw,” at its center, but both are about mechanized death rather than crimes of passion. Victims find themselves stuck in a grisly game of Mouse Trap or an OK Go video, a Rube Goldberg contraption designed by an uncaring God. To the extent that the universe has order, it is a killing machine.

In the LA Times, Meredith Blake and Daniel Hernandez try to boil down what’s going wrong with The Great British Baking Show:

It’s ironic that this episode was such a disaster because one of the things that has always made this show great, even in seasons that were otherwise underwhelming, is its multicultural cast and its steadfast refusal to give anyone a villain edit. Where else on TV will you see a teenager in a hijab competing against a grandmother who just retired from her job working for Boris Johnson — and root for both of them? This may be “The Great British Baking Show,” but it has always celebrated the culinary contributions of people all over the world who’ve helped revolutionize British food — once a wasteland of mushy peas, now a place where you can get tasty samosas or a halloumi sandwich at a highway rest stop. Arguably the most popular winner in the show’s history is Nadiya Hussein, a British Bangladeshi woman who infused her bakes with South Asian flavors. Last year’s winner was Giuseppe Dell’Anno, from Italy. This season’s top contenders are from Sweden, Malaysia, Angola and Poland.

Roger Rueggert details ten movie scenes where a watch stole the spotlight from the actors:

With an IMDB rating of only 5.9 and a critics consensus on Rotten Tomato that the movie “feels designed to annoy the audience into submission,” Daylight was certainly not Silvester Stallone’s greatest role. Nevertheless, Kit Latura’s (Stallone) performance in a tunnel connecting Manhattan and New Jersey brought the needed exposure for the Italian watch brand Panerai and led to significantly more demand (as well as more appearances in other action movies).

As Hellraiser was becoming a money-printing machine, Barker directed another film based on his work: 1990’s Nightbreed. Adapted from his novel Cabal, the film was in many ways the anti-Hellraiser, which did not please 20th Century Fox. The studio wanted more horror; what they got was an earnest fantasy story imbued with a dense queer allegory, so they cut twenty minutes out the final product and left it to languish in theaters while they gave all their attention to White Men Can’t Jump. It’s not surprising, alas. This is a film with greater ambitions than to scare. 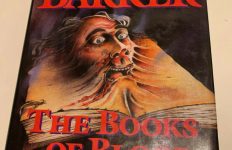