Browse: Home / The TOP SECRET! of Success (Year of the Month)

Surely the time for apologies about Top Secret! and its inferiority to Airplane! is over (and don’t call back that overdone line). The problems of the sophomore film by the Brothers Zucker and friend Abrams have been documented and repeated, including by the filmmakers in print and on the film’s DVD commentary, which starts as a laughing reunion and switches to an extended apology.

To be fair, just one of Top Secret!’s shortcomings would be fatal to nearly any movie, let alone all of them. By their own admission, ZAZ didn’t have a story to steal and hang jokes on like they did with Zero Hour, opting instead to write jokes first and then backwards engineer enough plot to stick them together. Then there’s the issue of familiarity – and coherence – of their inspirations: spy movies from the 40s and the fluffy Elvis movies of the 50s with the pastiches borrowing from Annette Funicello beach movies. The whiplash transitions between sources is hard to roll with. We’re given a distinctly Cold War setting in East Germany that is apparently under the control of Hogan’s Heroes-style Nazis where the citizens can be wowed by Little Richard’s “Tutti-Frutti.” Plus an extended goof on The Blue Lagoon.

Familiarity with the source material isn’t a prerequisite, of course. Airplane! has endured long after the Airport movies, let alone Zero Hour. Plus most of the time Top Secret! finds a joke that lands on its own terms. You needn’t have seen The Blue Lagoon to get the joke when a beach makeout session pans to the actors’ pawing hands and continues into a tangled mass of half a dozen legs and feet.  But there are stretches – a couple of them flirting with agonizing – where the ZAZ team goes hyperspecific on their references with little else to prop them up. Especially egregious are the elaborate musical numbers that recreate moments from documentaries on Elvis and the Beatles. Val Kilmer is a great straight-faced lead and a hell of a performer when singing and dancing, but he doesn’t immediately call to mind an icon like Elvis, and joke-light incongruities of his presence in a spy movie aren’t enough to carry these scenes.

So now that I’ve documented and repeated those problems once more, what makes this movie worthy of the parody pantheon, above and beyond the mediocrities of some of the later Zucker efforts let alone the abominations that would feed on the genre’s crumbs? Paradoxically, it’s the same thing that turns the musical numbers into the wrong kind of showstoppers – elaboration.

For laughs, let’s map the location of a gag idea into three zones. Zone 1 is the concept stage, which is the funny idea itself. This is the kind of humor you can do at home with your friends – wouldn’t it be funny if…? This level of execution might shine as a one-liners in dialog (“Our surgeons worked for three hours just to get the smile off his face” needs no further illustration) but generally they’re not fleshed out enough to hold up a movie on their own.

Zone 2 is when you get off your ass and bring the Zone 1 concept to life, but the actual laugh leans on pointing you back to the premise. It’s an illustration of the joke, designed as a delivery system less clumsy than someone standing up and saying the “wouldn’t it be funny if” out loud. It can be serviceable or it can be tiresome – sometimes both, as in plunking a rock star into an old spy movie. This is where most comedies, even some successful and respected ones, get hung up.

Zone 3 is where the gag gets brought to life and the humor hits twice – once for recognizing the original concept and again in the absurdity of seeing it actually played out and the undiscovered possibilities of doing so. And Top Secret!’s success comes from living in this zone more often than most any other comedy. “Skeet shooting while surfing is sweeping the nation!” is arguably a funny in the abstract, but not as funny as the actual sight of muscular young men riding waves and swinging rifles off their backs, trying to keep their balance as they fire blanks into the sky.

The highest achievements of Top Secret! lie in the scale and quantity of its sight gags that required preparation above and beyond what most comedy is able or willing to do. A platform moves away from a train instead of vice-versa. A full-sized submarine replica crashes through a brick wall. Even more dubious conceits can land through just the audacity of their existence, like when a flock of humans land on a giant pigeon statue for a bathroom break.

Airplane! had memorable lines and gags, but Top Secret! has memorable scenes, constructed to top themselves as they go on. For one setup, our heroes need information from a Swedish bookstore owner. Rather than use actual Swedish (or substitute a combination of Yiddish and gibberish which is the way German is treated) the filmmakers simulate the language by playing the entire scene backwards. Even better, the scene – all done in a single take and absorbing two days of shooting all told – starts with an unrelated gag and only gradually tips the true nature of the shenanigans.

This elevates a mild jokes about the cadence of the Swedish language into a marvel of choreography and performance. Watching it run forwards puts into perspective all the extra credit being earned here: reactions to lines that haven’t been delivered yet, Kilmer’s post “throw” celebrations followed by a dead-panned one handed catch followed by an elaborate wind-up.

The scene’s been constructed so that the most obvious giveaways are at the end of the scene (i.e. – performed first), and the actors (Kilmer, co-lead Lucy Gutteridge and the final role of the legendary Peter Cushing) sell the more subtle movements at the end of the shot/beginning of the scene so that we haven’t caught on to the extent of the ruse until people start shooting up firepoles and a dog runs backward. Of course now the movie’s gone on to the next scene, so it’s no wonder the movie didn’t catch on until home video.

That home video cover, invariably featuring a spotted cow in boots, is the best example of the the movie’s initial failure to communicate its strengths. The image communicates wackiness on the level of a cow in boots, with no way to glean the real reason the heifer has painted spots and Wellies. It comes from an extended sequence in the movie where two of the characters use an extremely effective costume to sneak past the guards. That’s your Zone 1 explanation. The actual gag, like the backwards bookstore, is the execution. In this case the filmmakers painted a real cow and put it in boots, the long way around of depicting a cow costume with the seams showing.

A lot of comedies, even Airplane! run out of juice before the end. Top Secret! by virtue of its slapdash storytelling saves much of its invention for the final run, with the conflict climaxing in a fist fight that tumbles over a bridge and continues underwater.

Once again the gag reveals itself in pieces, adding elements and props and extras until the ridiculousness of staging a fist fight underwater has become the sublimity of staging an Old West saloon fight underwater. Again the work can easily glide by before proper appreciation. The scenes were shot in a studio tank in fifteen-second increments while the actors held their breath. Special props had to be devised, like a chair that broke apart on a wire tug since there was no way to break it with a swinging impact.

Of course none of the previous thousand words can make any better argument for Top Secret! than any one of its inspired ten-second gags.

Airplane! is remembered as the superior movie for a lot of good reasons, not the least of which is the ease with which it delivers a barrage of jokes and gags. But consider Top Secret! from the end – replayed backwards, as it were – and appreciate the sweat it breaks. Even the effort put into the silly musical breaks isn’t just a long way to tell a joke, the act of staging and capturing that much silly choreography is the joke itself. Do a couple goofy dance moves if you’re satisfied with Zone 2. Top Secret! puts in the extra time in Zone 3 and delivers scenes that stand alongside Keaton and Chaplin, a commitment to the funny, and then some.

(And don’t start your No Parking in Zone 1 shit again.) 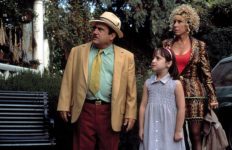