I’m a vampire, babe, suckin’ blood from the earth

If you’re looking for a tightly-plotted roller-coaster ride, you’re not going to like this film. But if you prefer a film as spooky and graceful as the cat that nearly steals the ending, A Girl Walks Home Alone at Night is for you.

Like an outlaw, the vampire protagonist—known as The Girl—operates according to her own personal code. While at times she serves as an instrument for justice, she is well aware, as she confesses to the young man, Arash, who has become her romantic partner, that she has done “bad things.”

She fits right in with the film’s setting, a desolate place called Bad City (a fictionalized Iranian town) that anyone in her right mind would want to leave as soon as possible. Yet few seem capable of doing so. The rich kids spend their nights partying, wasted on pills; the poor are dragged down by heroin. The doom-laden climate is matched by a culture of exploitation: from the oil derricks that take the riches from the earth to the pimp who rips off the prostitute who works for him.

One of the film’s strengths is the way it initially forges narrative connections. The Girl, not the only bloodsucker, of course, in Bad City, stalks the pimp: he is her first victim, after she symbolically castrates him by biting off his finger and rubbing his mouth with it. Arash, trying to get his vintage car back from the pimp, who seized it as payment for Arash’s junkie father’s debts, finds the pimp’s body and takes his money and drugs. Although this enables Arash to rise in standing with the rich kids, he seems like a good guy, if perhaps overly romantic, a dreamer. Sooner or later, The Girl and Arash will meet (FYI: there will be spoilers from here on out). 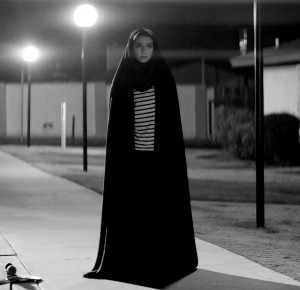 And what will happen when they do? Suspense builds every time we see her walking the streets at night. She meets him when he is walking home from a costume party—appropriately enough dressed like Dracula. High as a kite, he assures her he won’t harm her. She is disarmed by his gentle(manly) manner, and brings him back to her apartment.

As they dance with each other, a spinning disco ball showers the room with light beams, reflecting off of her Madonna and Bee Gees posters. “Death” by White Lies plays on her turntable. The song’s opening Velvet Underground/Joy Division riff shifts into energetic synth-pop, turning the scene languid, the layers of light and darkness enveloping the two people. Arash leans back, exposing his neck. In the convention of horror films, this moment should be his last. Instead, The Girl holds him; the sound of his heartbeat permeates the air.

This sets the tone for what follows. The narrative becomes looser. Music (the soundtrack mostly Iranian songs) guides us through the moody (long) takes on the fleeting dreams created by love, longing, and drugs. The black and white images are often dramatically underlit, a daring choice that pays off; for we not only feel acclimated to The Girl’s nighttime existence; we feel as if we are seeing the world through her perspective.

Due to the narcotic sense of time, the idea of space gains importance. Figures in the foreground are pronounced, while those in the background appear out of focus. Not interested in letting us fully into the minds of the characters, the film emphasizes the distinct movements of Arash and The Girl. When, for example, she suddenly enters a room, leaping with her cloak wrapped around her body, turning her into a malevolent shadow, we know she means business. 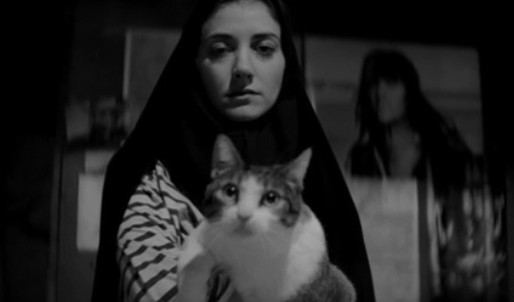 The film tells us very little; instead, asserting with a quiet confidence (and following the stylistic precedents of Jim Jarmusch, David Lynch, and Michael Almereyda) that the viewer take her own impressions from the repeated images of the luminous eyes of The Girl. Depending on one’s viewpoint, the film could appear as a vampire tale remade as a series of seductive dance floor moves at a goth party: Sheila Vand, who plays the girl, really knows how to act with her body.

Or, the film may seem more otherworldly—as her eyes are juxtaposed with the eyes of a cat. Present in much of the film, the cat is passed from Arash to his father to The Girl, reminding us of how non-human life is valued and treated; there are, granted, many different types of identities, of selves, crossing the streets, even if we are not always aware of it. Which is exactly what happens at the end. Arash, who has connected the death of the pimp and his father with The Girl, leaves with her in his car. The cat, that somehow remains steadily perched in between the two in this long take, reminds us of the distance between them, the differences in who they are.

The final scene lingers, giving us one last chance to take in the spell the film has cast. In its open deception, having been actually shot in Taft, California and not in Iran, the film is a welcome antidote to the half-truths masquerading as historical reality in the overwrought American Sniper. Directed by an Iranian-American, Ana Lily Amirpour, A Girl asks us: what better figure than a female vampire to represent how our post-9/11 fantasies of pleasure feel unmistakably haunted?