Browse: Home / Year of the Month: Babalugats on UNDERWORLD U.S.A.

I once saw a movie like that. All about revenge. Ex-con’s revenge. Very touching. Only he was smart. Not like you.

So speaks Cuddles, the ex-prostitute who is supposed to be hiding out from the mob but is currently hammered on a park bench and sucking seductively on a rod of ice. She says it to Tolly Devlin because she’s in love with him and it’s the nicest thing she can think to say. She loves Tolly, but she doesn’t quite understand him. Tolly’s not smart but he’s not stupid either. He weaves around playing mobsters and cops against each other as craftily as the Yojimbo, he slips in and out of nooses with the resourcefulness of James Bond, and has as much control over himself and his emotions as Hanibal Lecter. But he’s not smart. To be smart, you need to be able to hold two thoughts in your head at the same time, and Tolly is utterly consumed by one single drive — to see the four men who murdered his father dead. He has no code, no morals, no greed, no lust, no ambition, no ego, only this one pure drive. He is the enlightened hood.

Surrounding Tolly are the two institutions that form the architecture of his world. On one side, the police, universally detested but represented diligently by FBI Agent John Driscoll on special assignment from the Hayes Office. You can feel a rougher version of this character just beyond what the censors would allow, but even in his nuteured form, Driscoll is a ruthless figure, willing and eager to trade away the lives of innocent women and children if it gets him one step closer to making an arrest. But Driscoll has a code. It’s why he hasn’t been bought off like his chief of police, but it also means that his quest is doomed. He can never go as far as the crime syndicates, not with money, not with violence, and not with terror. And so he will never be more than a nuisance to the truly powerful.

The Syndicate knows it too, “There’ll always be men like Driscoll. “Just as there’ll always be men like us. As long as we don’t have any record on paper, as long as we run national projects, and legitimate business operations, and pay our taxes on legitimate income… and donate to charities and run church bazaars, We’ll win the war. We always have.”

This is the other pillar of society. It’s violent, but it’s stable, and it’s all but indistinguishable from the more legitimate branches of capital. The cops are no threat because they can be bought off, and if they won’t take cash, then a dead child is also very persuasive. And besides, if people really wanted to end narcotics and prostitution they would stop buying it. The Syndicate isn’t corruption, it’s the natural state of the world, and as long as the world keeps spinning, they’ll stay on top of it. The only thing they really have to worry about is some lunatic showing up and shooting everyone.

And yet, this is a system that creates lunatics. We’re first introduced to Tolly when he’s 14 years old. It’s New Year’s Eve and he’s in an alleyway stalking a drunk GI so he can rob him as soon as he passes out. He lifts the man’s watch and wallet, dodges a cop, then gets mugged by another boy who looks even younger than he does. The two fight, the other kid has a razor in his knuckles, and Tolly gets a nasty gash down his face, but he keeps the loot, and stumbles his way, bleeding profusely but arousing nether sympathy or suspicion from the partiers clogging the streets, to the only person who seems to give a shit about him, an aging drunk who mothers him in place of the kids she can’t have. He asks for booze, gets a tie, and takes obvious note of the safe before the two witness his good-for-nothing old man get murdered in the alley just outside. The movie’s subtle implication that the senior Mr. Devlin had it coming is a nice touch. This isn’t about justice, it’s about murder. It takes 30 years, told in about 90 minutes, but Tolly gets his revenge. And he dies in that same alleyway. And the movie leaves us there. This is the story of one murder, and eight more that grew as a consequence of it, and nothing else.

The Syndicate has lost a few players, but they have other men. They always will. Driscoll made one arrest, and only one. He’ll start again just as the mob does. Cuddles will go back to her old life; it was never going to work out with her and Tolly anyway. Sandy will mourn him, longer than he deserves. We don’t need to see any of it. You can’t pity a man like that, a man with nothing to lose. Can’t reason with him either. He got what was coming to him. What more could he ask for? 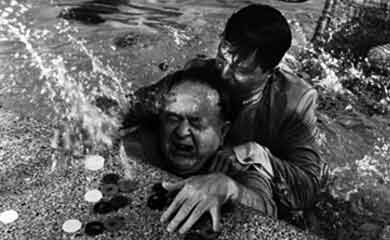