Browse: Home / A Chronicle of CHRONICLE OF A SUMMER (Year of the Month)

In 1895 The Lumière Brothers filmed workers leaving one of their factories in the earliest example of public cinematography and (by some measures) the first example of a motion picture ever. The workers pour out of the building’s egresses and ignore the camera recording them. Nothing has ever captured them in motion. Their mannerisms, one assumes, are free of pretension and performance, other than the normal amount in the presence of one’s peers.

In 1961 Edgar Morin, a sociologist, and Jean Rouch, an anthropologist, filmed Chronicle of a Summer, an experiment in sociology and filmmaking, pioneering the man-on-the-street techniques made feasible by lighter cameras and sound equipment. It opens like the Lumière film, with workers streaming out of subway tunnels rather than factory doors. Participants are approached with a simple question – “Are you happy?” Strangers on the street often brush off the questions and the camera with cold shoulders or terse answers.

Those that do participate throughout the summer include a motely cross-section of early 60s Paris including workers, artists and students. Some were friends or acquaintances of the filmmakers. The camera doesn’t have to sit to the side and watch its subjects go by anymore. It can follow subjects at a run, crowd with them on a bus, capture their whistling.

The subjects get personal. There’s confessions: one interviewee cooks the books at his shop, the artistic couple cops to forging Louis XIV “antiques.” Squabbles erupt over politics and the ongoing Algerian War. Two generations lob blame back and forth, with a 20-year-old worker despondent and checked out because of his frustration with the previous generation’s failures. A splashy sightseeing trip to tourism hotspot Saint-Tropaz is a chance to dunk on the other tourists there. Landry, a travelling student from the Ivory Coast, endures some racist chatter from a woman insisting she’s not racist.

The sharing gets intimate. Two of the participants, Mary Lou and Marceline, have lengthy uninterrupted monologues. Mary Lou talks about her recent emigration from Italy and the crushing, near-suicidal loneliness that followed. She’s filmed in what’s now a standard interview setup, seated next to the director as he prompts her with questions. She writhes with emotion. The depth of her despair is uncomfortable to watch, though happily when the filmmakers revisit her she’s in better spirits and photographed with her new boyfriend.

Marceline talks about her experiences as a survivor of the Holocaust. Now, after years of seeing survivors as fragile and elderly, it’s a cognitive shock to meet a young cosmopolitan woman with these memories and tell-tale tattoo. Marceline performs her monologue as a reading as footage plays of her walking the streets of Paris, center frame in a lengthy shot that eventually leaves her in the distance as though shrinking. It’s a departure from the verité techniques of the rest of the film, as though space had to be constructed for such a backstory. 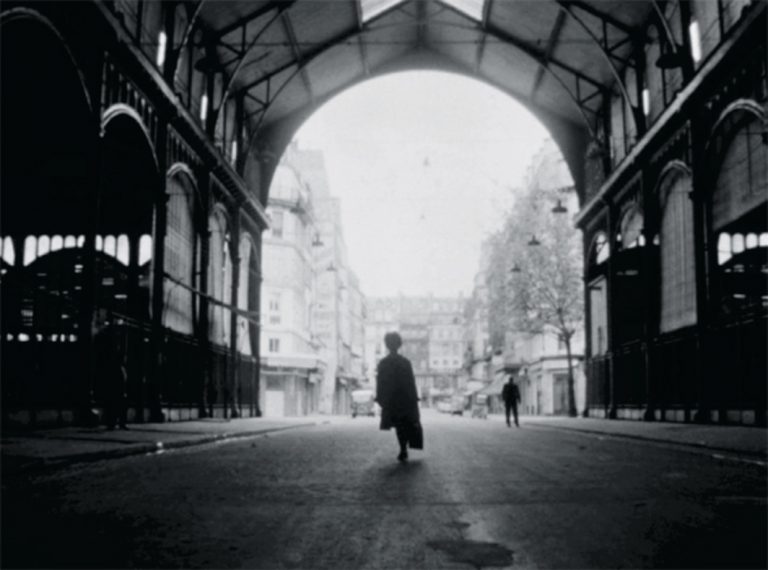 The most memorable parts of the film are its reflexive opening and closing. At the beginning Rouch, Morin and Marceline talk about approaching random people with their question and debate whether they’ll get authentic reactions or not. At the end of the film, the participants sit in a screening room reacting to the film we just saw. Everybody suddenly becomes Holden Caulfield as accusations of phoniness fly, though nobody can agree on who is and isn’t authentic in their sections.

Mary Lou is either putting on airs or is the most authentic because she isn’t acting. Others say Marceline is the phony because her portion was written and performed, no matter that she based the words on her real experiences. The perspective time has given us muddies the waters – “Mary Lou” is Marilù Parolini who was working at Cahiers du cinema at the time and would go on to become a screenwriter (her anonymous boyfriend is actually a young Jacques Rivette!) and Marceline Loridan-Ivens (Rosenberg at the time of filming) was on the cusp of her debut as a documentary director. Their involvement in the filmmaking scene and friendships with the filmmakers makes their scenes more dubious than those of the travelling students or the working class Angelo – or does it? Familiarity with the process isn’t much of an advantage here because this process didn’t exist before Chronicle of a Summer.

According to the discussion, there are truths you can capture on camera, truths you can’t, and things you shouldn’t. One participant declares anything false “boring” and anything authentic “indecent.” Viewers who don’t find Mary Lou’s emoting fake find it embarrassing.

Morin and Rouch pace the hall afterwards, despairing of the fate of their film. The audience doesn’t just disbelieve the reality they’ve attempted to capture, but their doubts extend beyond the facts and into the motivations. “We’re reaching a stage when we question truth which is not every day truth, we’ve gone beyond that. As soon as they’re more sincere than in life, they’re labelled as either hams or exhibitionists.”

Every factory uses multiple cameras to watch the comings and goings of each door, as jaded workers ignore their stare. Cameras now fit in the pocket of every member of the public. The ability to capture, trim, and contextualize has been gifted to everybody. Looking back at what was captured when there was only one camera on the planet doing this work (see paragraph 5), the results may not have been a wild change in human behavior, just an overwhelming amount of the same.

1961 was a unique summer in Paris, the first to be chronicled on camera in a way that allowed people to broadcast their own personal narratives. Now chronicling the individual experience is a year-round default. All the authentic, the phony, the hams and the exhibitionists are never more than a button-push away, and the audience still gets to sort which is which.

Year of the Month: Miller on GONE FISHIN’→