Twenty Minutes into 2013’s Carrie, I wondered: what was the purpose of remaking this? What did Carrie White ever do to anybody?

I’m old enough to have first seen 1976’s Carrie on broadcast tv when I was 9. Considering the film’s Academy Award nominations for Sissy Spacek, Piper Laurie and the pedigree of director Brian DePalma and novelist Stephen King, Carrie was never a sloppy, exploitative misstep. Its aged well. Its as if Hollywood wants to sell the same ticket twice. They want fans of the original to return out of curiosity and new fans who wouldn’t sit through a 40 year old film, no matter how universal its themes. But still: the first 30 minutes of stage setting felt like a TV movie rehash. I felt antsy watching something I thought I knew. Turns out I was just fiercely loyal to the original and as impatient as a youngster watching a 40 year old film.

But Director Kimberly Peirce (Boys Don’t Cry ’99) didn’t intend a shot for shot remake. This Carrie is a proper adaptation of Stephen King’s book, which I’ve never read. I approached this version with two burning questions: 1) Did they dare touch or try to improve upon DePalma’s prom-nightmare split screen? And 2) How did the book end? Part of the 1976 film’s legend was not having a big enough budget to shoot the books elaborate ending. Time has told: 1977’s original proved to be a masterful work-around with strong performers. 2013’s Carrie feels like a corrective text, updated with cell phones and fancy CGI.

Chloe Grace Moretz portrays awkward, friendless teen Carrie, who after getting her first period in a humiliatingly public way, discovers she has telekinesis, the ability to move objects with her thoughts. After Carrie gets severely bullied by a group of girls who post awful cell phone video of her vulnerable and screaming in the shower, the bullies are promptly banned from attending prom. One bully plots an elaborate revenge scheme (why??) while the other, a guilt-harboring Sue Snell (Gabriella Wilde), instructs her jock boyfriend, Tommy Ross (Ansel Elgort) to take Carrie to prom instead. Meanwhile, back home, Carrie has to deal with a overprotective, single mother (Julianne Moore), an unhinged religious zealot who predicts her daughter to be the school’s laughing stock. Whether you’ve read the book or seen the original film, it’s a mild spoiler to know everything comes to a head at that prom, and things don’t go exactly as planned for anybody.

For a while, its hard watching this without the ghost of the original leaking through. One shouldn’t compare actors and roles, but a remake forces the audience into a Who Did It Better debate. Watch Moretz’s eyes as she attempts telekenetic home study, getting the furniture in her bedroom to hover. I barely believed her, even with good CGI. Then compare Sissy Spacek’s alien and unique gaze. In her establishing scenes, Spacek appears other worldly, unable to blend with the others. As for Moretz, beyond her depressed hair, it was hard to buy her as ostracized and awkward. But I nearly missed the point. She’s shy as anyone would be in high school. Pushed further into isolation after menstruating in the girls shower, ignorant of her own body since her Quick-With-The-Butcher’s-Knife-mother considers everything, especially female bodies, sinful. Carrie’s on her own and studies every book in the library on telekinesis, her new found gift.

There’s a kaleidoscope of complex emotions and humiliations Carrie quietly endures over the course of the film. By prom night, Moretz seemed to’ve gathered as much confidence as the character she inhabited, and boy is she gorgeous. I mean, really: not ONE friend?!? And who besides Julianne Moore would you entrust the iconic Margaret White role? As incredible a performer as Moore is, Piper Laurie was a force of nature in the role. According to IMDB, Laurie initially thought the film a black comedy. Here, Moore plays Margaret as somber and grounded (I lightly use those words lightly here lightly considering her scene in the dry cleaners of enduring small talk from a neighbor) and subsequently doesn’t look like she’s having much fun as Laurie did. Julianne Moore is too dignified to chew scenery.

The villains, primarily Chris (Portia Doubleday) and Billy (Alex Russell), are obnoxious and whiny and I couldn’t wait to be done with them. They collect a bucket of pigs blood out of plot necessity instead of logic. I never believed these modern teens would go that far over a powerless, friendless girl. 1976’s Chris (Nancy Allen) looked demonic and inflamed. 2013’s Chris (Doubleday) more bratty and entitled. Who really surprised me was Ansel Elgort’s easy read of Tommy Ross. He’s a good kid. His scenes with Carrie at the prom felt natural and sweet and I thought, if he could only make it out of the auditorium hellfire he’d probably make a great coach or athlete or senator some day.

But I was here for the by-the-book ending and it delivered. Once this Carrie leaves the school auditorium in flames, I had no idea where she was going and that was kinda exciting, even if it didn’t feel quite as real as the simplicity of 1976’s vision. Pierce doesn’t need to mooch DePalma’s split screen. Both versions offer their own unique spin on King’s story and would make a cool double feature. Is one better? Worse? My heart stays with 1976’s Carrie as a more realized vision of teen angst with deeper committed performances and an apoplectic Spacek generating electricity in that revenge sequence. 2013’s Carrie feels more like an X-men origin story where a young woman crushes an entire town to ash. The original Carrie is a victim who learns to stand up for herself, at an incalculable price. The new Carrie, a tragic origin story of an undiscovered superhero.

The film’s only head scratcher? That auditorium full of non-responsive teens at the prom. No, everybody doesn’t laugh, they do something much worse. They stand and stare silently, not even holding up their phones for that horribly tragic moment unfolding on stage. No one helps, no one approaches, no one even screams WTF. I don’t get this generation. 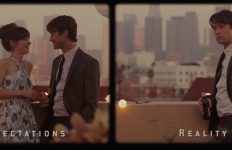 Year of the Month: Joseph Finn on 500 Days of Summer→