Browse: Home / And These Visions Of A Spaceship Are All That Remain: Alien (Year Of The Month)

The first two Alien films were made by working-class men. Aliens was made by an American, and it’s a carefully crafted product where every element is brought into harmony to loudly declare its every intention at every moment. The American worker walks into the room with a point to make, and he’ll crush anyone who gets in his way. Alien was made by an Englishman, and its a carefully crafted product that uses a central task to allow many ideas to accrue around it, none of which land with much force. Aliens is a world of facts, Alien is a world of possibilities. Alien reminds me of Cowboy Bebop, in that we spend a lot of time looking at machines and processes, but whereas a savvy enough viewer could break down how the flamethrowers and spaceships and Spike’s fighting style work, this film’s processes are completely inexplicable. Why is there dripping water in the engine room? What is the milk-like substance and anal-bead-looking thing inside Ash, and why does he do those exercises we see early in the film? Why does smoke come out of the character’s spacesuits? Alien is in the top five most influential science fiction films, and that makes a lot of sense, because this is a movie that presents us with ideas and expects us to play with them later.

One of the side effects of this is that the actors have the specific challenge of appearing to know what they’re talking about, something Scott openly admires them for on the commentary; the movie takes a naturalistic style with the characters, not just by letting actors mumble and swallow words, and not just by avoiding larger-than-life dialogue and iconic characterisation, but with sound design that doesn’t stress the characters above their environment (helped in this case by the cooly distant camera work that allows this kind of work). The drive of a slasher plot – or, more accurately, a haunted house/monster movie plot – is what holds all these ideas together. It doesn’t matter if nothing fully makes sense or if mysteries weren’t solved or if Points haven’t been Made, because a plot was begun at the start of the movie and finished at the end of it. In fact, a whole lot of people would still be alive if people hadn’t been trying to sate their curiosity. Solving mysteries isn’t really necessary, and it’s okay to let them hang over our lives. The film is famous for being about rape and male fear of pregnancy, but it doesn’t actually say anything about those topics, just letting them hang over the film the same way it does all the tech and gross alien shit. 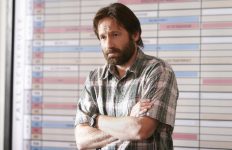