Browse: Home / Assigned Male and Perfecting the Art of Being Unfunny

Assigned Male is a propagandist putting on the costume of a comedian and not noticing that it doesn’t actually fit. Its premise is that it follows Stephie, a preteen trans girl navigating the world and trying to hold onto her gender identity; it actually exists as a vehicle for author Sophie Labelle’s anger at the oppression of trans people and as a spirited affirmation for trans readers. I come not to bury AM, but to analyse and contextualise it within the broader context of gag-a-day strips and comedy, because it’s as if it can recognise the broad outline of how a joke is constructed but doesn’t fully grasp the guiding principles. Comedy is one of the simplest structures in any kind of storytelling – set up an expectation and then subvert it – with the difficult part being finding the balance between a connection that’s too obvious and a connection that’s too esoteric. For some reason, the joke that has stuck in my head as an archetypal Joke is a tiny gag from The Goodies – a character rips the crown off a pineapple, and it explodes like a grenade. Now, that’s not the greatest gag in the world*, but you can immediately see the connection – pineapples look like grenades, therefore if you pull the crown off, it’ll explode like one. It’s not something you would immediately think when looking at a pineapple, but your brain sees the logical connection, but it’s a strange enough connection to be surprising and make you laugh.

This is why what defines the great comedy writers is a worldview, and they can create comedy by going in one of two directions. The first is that they observe the strange connections between the world that already exist – ranging in sophistication from the witty observations of, say, George Carlin to the fact that pineapples look like grenades. This clip on The Simpsons is one of my all-time favourites, because the punchline applies ordinary Dad Logic to an absurd situation. If a Dad was going to engage with the concept of poison pizza, this is exactly how he would do it, because Dad’s are notorious about not wanting to waste time or gas on frivolities. The second way is that they present what appears to be ordinary reality, only to go somewhere much stranger. 30 Rock is one of the all-time greats at this approach, creating so many classic garden-path sentences that begin somewhere normal only to suddenly veer somewhere nuts (“I have good news and I have bad news. The bad news is I am shutting down the page program. The good news is… for a different group of people.”).

I grew up reading newspaper comics and eventually migrated to webcomics when I learned about them (many but not all of which draw on the logic of newspaper comics), and what fascinates me is how clear and rigid the structure is – at their simplest, they’re three panels, two of which are setup, one of which is punchline (slightly more complex sensibilities generally require four panels, but the principle is exactly the same). It’s incredible the way the best comedy writers can work within that structure like a jazz soloist; David Malki of wondermark makes it a point of discipline to finish as many strips as possible with two punchlines, and the sheer staggering number of jokes that Darby Conley fits into a strip of Get Fuzzy is awe-inspiring. But even people who aren’t experts, philosophers, or outright geniuses can find their own personality and sensibility in the simple structure of a gag-a-day comic and consistently deliver at least a middling punchline. A basic respect for the conventions of the medium rewards even a less sophisticated worldview.

Assigned Male does not have a basic respect for the conventions of the medium. If those other comics are like a tango, AM is like being gently pushed out of the room. It’s as if Labelle has had comic strips explained to her but never seen one in the wild; she doesn’t subvert your expectations because she doesn’t build up any expectations in the first place. She suffers from the exact opposite problem of Tom Meyers – as Ruck breaks down, his worldview is a sloppy amalgamation of old standup routines and his vague understanding of the cultural climate as opposed to any personal views he may have, and so he comes off as an empty and hollow man. Labelle absolutely has a worldview, and it dominates her comic to the exclusion of anything else, and I think it’s a large part of why the comic is so unfunny. Assigned Male is so ideologically rigid that neither kind of humour I outlined above can be allowed to emerge. It does make observations about human nature and behaviour, but it doesn’t then apply them to ridiculous contexts – it just lets them hang in the air like a fart in an elevator – and it certainly won’t pull a 30 Rock and trick you into thinking transphobia is correct before subverting that.

(That lack of respect for the medium extends to the awkward design of the website; a more typical webcomic generally has navigation buttons)

Comedy must be dangerous to have any effect. Unfortunately, the only thing at stake is social embarrassment; the risk that your joke might not be funny, that your observation is trite or wrong, that you outright offend your audience, and perhaps worst of all that your audience might take you seriously. So a comedian has to play in the territory they find the most frightening, risking that embarrassment without having a complete lack of confidence in their ideas; some bad comedians are bad because they intentionally try to offend the audience, whether it’s in the manner of that kid at school who saw all attention as positive attention or the fat kid preemptively degrading himself so the bullies didn’t pick on him. Assigned Male has the opposite problem – it takes its ideas so seriously and considers them so conclusively true that there’s no room for even the risk of surprise. I want to make it clear that I completely understand this – I generally feel uncomfortable making jokes out of trans issues because I find them too serious and important to treat frivolously, and I don’t even have the added psychological stress a trans person has in trying to retain their identity under *gestures wildly* all this.

But that lack of risk points to the other problem the comic has. Tom Meyers’s standup looks empty because it has no perspective; Assigned Male looks empty because it’s completely consumed by perspective. In the strips available online, there’s no interest in music, art, television, sports, history; there is only the gender binary. On Labelle’s Twitter page, she’s put up some strips about JK Rowling, and that’s because everyone on the planet is currently talking about JK Rowling. I find myself thinking of Always Sunny, which compensates for the inherent limitations of its world and premise with a willingness to chuck absolutely anything and everything into it and watching that object bounce around Paddy’s like Flubber. AM constantly circles its own ideology; this particular strip is deeply ironic because theory is the first, second, third, fourth, and fifth concern of the comic and filtering that theory through specific experiences doesn’t seem to be a concern at all, let alone putting it into practice and seeing where it goes. It makes the theory expressed feel a bit ivory tower, but more importantly – and I genuinely feel a bit mean for saying this – it just feels kind of sad.

Literally all that Assigned Male has in life is gender theory. I do mostly agree with it, but that’s because it’s some pretty 101 stuff that anybody browsing Tumblr for a couple of months is gonna pick up. Does Labelle do nothing aside from scroll through social media and draw Assigned Male? Does she play guitar and simply not choose to show Stephie trying her hand at it? Does she mix cocktails and simply believe it wouldn’t be funny to show an eleven-year-old’s childlike understanding of alcohol culture? Has she never worked a shitty call centre job? Does she seek out old Italian horror films? Has she ever gone through a bad breakup? Has she ever actually read anything by bell hooks or Janet Mock? What’s her social circle like? Assigned Male displays a worldview, but not the world it’s being viewed through. It comes off as sincere in its convictions but also unyieldingly incurious and unempathetic outside of a very, very limited set of interests (which weirdly enough makes it feel like Law & Order in its larval form – no system of tools and devices to advance its cause the way L&O explores the whole world through the lens of the police system).

Its at its most endearing to me when it genuinely embraces being propaganda and an expression of specifically trans feelings – strips like this or this that don’t even pretend to have a punchline. Even as some of the weaknesses of the comic are still apparent (like how redundant a lot of the visuals are and how I’ve heard these ideas a thousand times), these strips resemble autobiographical comics I’ve read before and have the same appeal, a window into a life I never lived and an expansion of my empathy. I find myself thinking of both Bob Dylan and Courtney Barnett, oddly enough. The former is an artist who put on a costume, but he fully commits to whatever costume he’s putting on at this particular second; his Folkie costume was backed up by a deep knowledge of what folkies do, sing, wear, and play, and so he could appear at least 95% correct with his impersonation, express himself with the other 5%, and even modulate how accurate his mask is for effect. Courtney Barnett does not wear a costume; her music and her experiences are unvarnished Barnett. Assigned Male sits in this awkward space where the costume doesn’t have much effort put into it but the experiences aren’t particularly unique. 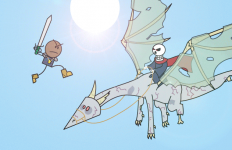 Order Of The Stick: Degrees Of Good And Evil→ 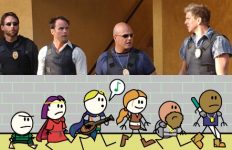 The discipline not to write setting: THE SHIELD and THE ORDER OF THE STICK→