Browse: Home / Order Of The Stick: Degrees Of Good And Evil

SPOILERS for Order Of The Stick.

Lawful Good, Roy: A dedication not just to creating Goodness, but in perpetuating it for as long as possible. Roy has a keen eye for responsibility in both a literal and abstract sense – he is both highly aware of the consequences of his and other’s actions, and has a strong sense of how people ought to be – how Family and Rulers and Adventurers ought to act. It’s that balance between the literal and abstract that makes him heroic; left to his own devices, he can be condescending and superior, but his drive to fix things and bring them to their most effective is genuine and leads him to see where the things he does work and when they must be swapped out for something else.

Lawful Evil, Redcloak: The counter to Roy’s Lawful Goodness; the moral universe of OotS is wide enough that it can get pleasure out of Redcloak and Roy perfectly mirroring each other. On a superficial level, Redcloak is as dedicated to perpetually generating Evil as Roy is to creating Goodness; over the course of the comic, he has created and maintained entire systems designed to protect his Evil people, a sympathetic goal in a universe actively designed to kill them from birth. One difference from Roy, though, is that Redcloak is exclusively focused on making life better for his people and his interest in Good creatures ranges from callous indifference to active malice, and he enslaves and kills otherwise perfectly innocent humans for shits and giggles. The main difference is that, where Roy recognises the consequences of his actions and chooses to change his conception of what being Good means, Redcloak blinds himself (sometimes literally) to things he doesn’t want to face up to and doubles down on the idea he had in his head.

(The thing I am most looking forward to going into the final book is the eventual verbal conflict between Roy and Redcloak, something that has amazingly never happened in the seventeen years the comic has run)

Chaotic Evil, Xykon: Rich Burlew, writer and artist of OotS, has described Xykon as ‘not just evil, but kind of a dick about it’; I prefer to think of him as someone completely and entirely selfish but smart enough to get away with it. He is exclusively concerned with his own wants and desires and has zero respect for rules, especially ones that only have social or esoteric consequences, because he has a rock-solid awareness of the concrete facts of any situation. This is what makes him a terrifying and powerful villain – if Roy’s skill is swiftly forming long-form plans, Xykon cheerfully and effortlessly knocks them down, adapting to any situation – including, interestingly, letting other people make up plans if they’re useful to him. To put it in Speed terms, he’s crazy, not stupid.

(What’s also interesting is the number of times he’s sown the seeds of his own eventual downfall; he sometimes uses his gift for the concrete facts to verbally smack down the heroes, and more often than not the members of the Order actually listen to him and adapt.)

Chaotic Good, Elan: A man who wants to create the most happiness. Roy’s form of Goodness is totally abstract, an idea of how the world is supposed to be, which means it’s something he often inflicts on others (not just in his constant unasked-for quips, but in situations like when he tied up an arguing father and daughter in the forest to try and knock values of Family into them). Elan is someone who sees the world in terms of emotions, a gestalt of many individual feelings that combines into an overall picture; it’s funny to contrast him with Roy, in that I think both of them see the forest and the trees at the same time, but where Roy can see straightforward cause-and-effect on both an individual and birds-eye-view, Elan sees the emotions of individual people and the world as a whole (no wonder Elan is always so popular at parties). In turn, his development can be seen the same way. One of the biggest personal blows he suffers is when he meets his father and discovers he’s a horrific tyrant; he’s caught between his desire to see his father happy and the mass unhappiness his father causes, and finds the latter winning out. And if you pull back and look at Elan’s total development, it’s how much he learns and changes in response to the people he chooses to spend time with; Roy, Redcloak, and Xykon are Self-Made Men who use others to get what they want, while Elan perpetually fuses with and incorporates the perspectives of others to grow.

True Neutral, Vaarsuvius: Truly self-driven. V actually isn’t that different to Xykon in a lot of ways, dismissing esoteric and social rules in favour of the facts of the situation and driven by personal desires; the two differences are that V’s interested in working out how things work just for their own sake, and that they recognise and take value in the feelings of others, even if on a much smaller and more personal scale than, say, Elan. This is what makes V a wild card on the scale of the comic as a whole, capable of both Good and Evil on a wider scale in the search of their individual goal. When you think about it, an early joke plot foreshadows V’s temporary fall, when they get offended by Elan’s appropriation of Wizardness and lash out, only to apologise afterwards for overreacting. V is willing to Go Too Far, but is also willing to make amends.

Chaotic Evil-ish, Belkar: Expansion from selfishness. As V puts it once, Belkar is exclusively concerned with killing or fucking, and his arc is all about making his ability to do that as simple as possible. To an extent, he lacks Xykon’s scope, but he’s also been limited due to Roy choosing to take responsibility for him; much of the comic has railroaded him into being on our hero’s side using magic, but at this point he’s found the adventuring team too useful to throw away. This is a lesson for both Law and Chaos; Belkar finds that Roy’s reliably Lawful attitude keeps him alive, out of jail, and in the path of some high quality ownage, and Roy finds Belkar’s skills are useful enough to justify keeping someone whose values he wildly disagrees with on the team.

Chaotic Good-ish, Hayley: Expansion from selfishness. Hayley begins the comic completely consumed by greed; a slight retcon only expands her from this by one degree, showing she’s motivated at least partly by wanting to help her father, which is still protecting something that belongs to her. Much the comic develops from blunt point-and-laugh humour to something with a beating moral heart that’s genuinely concerned with Good and Evil, Hayley slowly grows accustomed to the faces of her teammates, genuinely having affection for them and wanting to protect the world as a whole, to hang out with her friends if nothing else. Interestingly, she also shows the limits of a Chaotic outlook; during the events of Don’t Split The Party, she’s forced to play the part of Roy, which means operating a complex system to keep the rebels alive, and by her own admission trying to live like that and act as everyone’s rock wears her down in a way it wouldn’t for Roy. 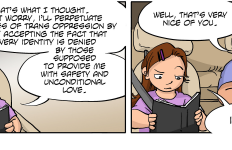 Assigned Male and Perfecting the Art of Being Unfunny→