Browse: Home / A Collection Of Quotes I Like, Volume II

“But as far as effort goes: I don’t know what’s between zero and the city-mandated minimum, but from now on, let’s just call that ‘The Billings’.”

“It would be humiliating, having to lie there while the better man refuses to spill your blood. Mercy is the mark of a great man.”
*stab*
“Guess I’m just a good man.”
*stab*
“Well, I’m alright.”

The Dude, The Big Lebowski

“You know what the first rule of combat is? Shoot them before they shoot you.”

“This is a thousand monkeys working at a thousand typewriters. Soon, they’ll have written the greatest novel known to man! Let’s see… it was the best of times, it was the blurst of times?! You stupid monkey!”

“Do not call up that which you cannot put down.”

The Case Of Charles Dexter Ward

“I already confessed, no need to confess again.”

Bob Dylan, “Thunder On The Mountain”

“This whole raid was as useless as that yellow, lemon-shaped rock over there. Hey, wait a minute. There’s a lemon behind that rock!”

“You wanna be Mayor. All I want is to keep being a cop.”

“All I’m asking is that we each respect the other’s endgame.”

“It’s hard to be a hypocrite when your guiding philosophy is ‘do whatever’s best for you’.”

Loki, Order Of The Stick

Ellis, No Country For Old Men 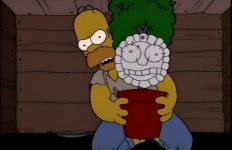